A Legend is Born

Stevie spends his formative years in Oak Cliff district of South West Dallas and on his 7th birthday, Stevie is given a three string toy guitar. He soon learns to play “Wine, Wine, Wine” and “Thunderbird” by the Nightcaps. His first real instrument will be an electric guitar handed down to him from his elder brother Jimmie, a few years later. 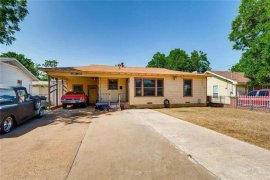 Stevie buys his first record, Lonnie Mack’s “Wham,” and plays it so many times his father breaks it. 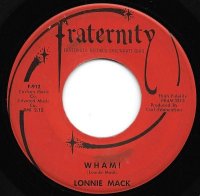 Doyle Bramhall hears Stevie playing for the first time “Jeff’s Boogie” and tells him to continue playing and practising. Doyle becomes a good friend of Stevie's and will become instrumental in Stevie’s vocal and songwriting development.

Stevie’s band plays a gig at Lee Park in Dallas, his first proper gig beyond school dances and parties. By 1969 he is introduced to the Austin music scene which is more tolerant of the blues. 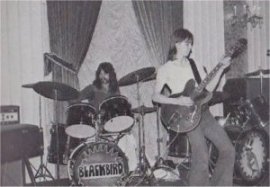 Stevie sits in with the band Cast of Thousands for a high school compilation album called "A New Hi". This is his first studio recording. 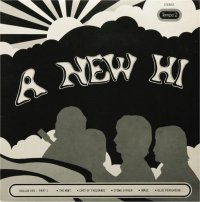 At the age of 17, Stevie moves to Austin with Blackbird. He had dropped out of high school to concentrate on building a career in music. His base is a club on the edge of town called the Rolling Hills Country Club. It would later become the famous Soap Creek Saloon. 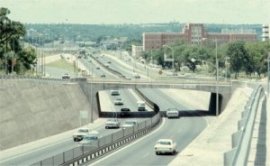 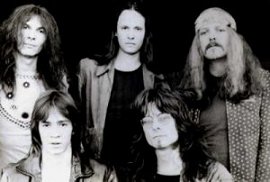 Stevie joins Marc Benno and the Nightcrawlers who are recording an album in Hollywood for A&M Records. However the album is not released. The band also features Doyle Bramhall who begins a 17-year songwriting partnership with Stevie. 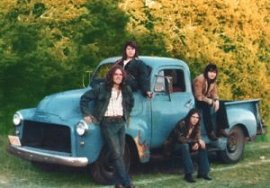 Stevie obtains the beat-up Fender Stratocaster known as “Number One,” which becomes his trademark guitar for the rest of his career.

Paul Ray and the Cobras

Stevie joins Paul Ray and the Cobras. They average around 5 gigs a week for the next 2 1/2 years.

The Cobras release a 45rpm record, Other Days/Texas Clover which was Stevie’s second recording on vinyl.

Band of the Year

The Cobras are voted Austin's band of the year in the Austin Sun's third anuual poll. 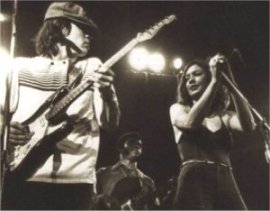 Stevie forms the blues rock band Double Trouble in Austin, Texas with Johnny Reno (sax) and Jackie Newhouse (bass) who join Stevie and Fredde. The band will eventually gain widespread popularity across the USA and are credited in helping the blues revival. They take their name from an Otis Rush song. 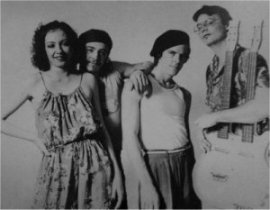 Studio session at Jack Clement's Belmont Studio, Nashville. Billed as Stevie Ray Vaughan and Double trouble, featuring Miss Lou Ann Barton, the band recorded whatwas supposed to have been their first album. However it was never released, as they were not happy with the sound. It would later became the bootleg "The Unreleased First Album"

On 5th December 1979 a police officer sees Stevie using cocaine in a dressing room, before a gig in Houston. The officer arrests Stevie and on 17th April 1980 Stevie is sentenced to 2 years probation for possession. During that time he is not allowed to leave Texas. He later gets this ruling lifted, so that he is able to work outside of Texas.

Stevie marries Lenora "Lenny" Bailey. The couple met after a show during on of Stevie's performances with the Nightcrawlers at the La Cucaracha nightclub in east Austin. 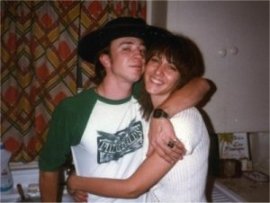 The band plays at Steamboat 1874 in Austin. The show is recorded and is later released as "In the Beginning".

Tommy Shannon replaces Jackie Newhouse on bass. Shannon had played at Woodstock as a member of Johnny Winter’s band. 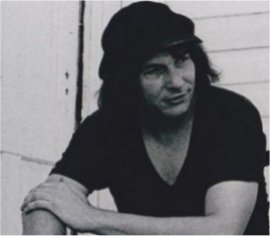 Double Trouble are filmed at a festival outside Austin. The next year, Stevie’s manager gives a tape of the show to Mick Jagger who is impressed and asks them to come to New York to play a private party at New York’s Danceteria on 22nd April 1982, with a view to signing them to Rolling Stones Records.

Stevie and Double Trouble play the Montreux International Jazz Festival. They are the first unsigned band to play the festival. The band are booed for being too loud and not jazz, but the band wins a Grammy for their performance of “Texas Flood” at this festival. Stevie meets David Bowie and Jackson Browne at the festival. 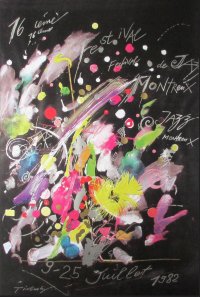 The band accepts Jackson Browne’s offer of studio time and lays down tracks for what will be the Texas Flood album. About this time, Bowie asks Stevie to add guitar work to his Let’s Dance album and tour with him on his upcoming Serious Moonlight world tour. Stevie later quit the Bowie tour during rehearsals to focus on his own band.

Renowned producer John Hammond hears a tape of the band’s 1982 Montreux performance, and is instrumental in getting the band a record deal with Epic Records. Hammond is credited with “discovering” Billie Holiday, Bob Dylan and Bruce Springsteen, among others. 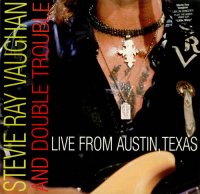 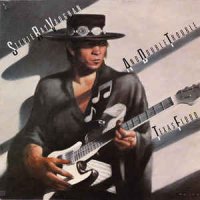 Start of the "Texas Flood" tour, consisting of 116 shows over 5 legs, in North America and Europe.

Completion of the "Texas Flood" tour.

Start of the "Couldn't Stand the Weather" tour, consisting of 147 shows over 9 legs, in North America, Australasia and Japan.

The second album "Couldn’t Stand the Weather" is released. 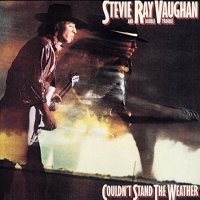 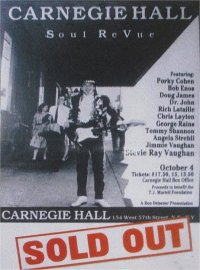 Stevie wins two W.C. Handy National Blues Awards: "Entertainer of the Year" and "Blues Instrumentalist of the Year". He is the first white person to win either.

Completion of the "Couldn't Stand the Weather" tour.

Start of the "Soul to Soul" tour, comprising of 201 shows over 8 legs, in North America, Australasia and Europe. 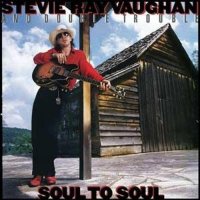 Stevie meets new love Janna Lapidus when the band arrives in New Zealand for a show. The two hit it off and eventually decide to be together. In the years before his death Stevie referred to Janna as his fiance.

The band record 2 shows in Austin and Dallas for a live album which is to be called "Live Alive".

Stevie collapses in Ludwigshafen, Germany after inflicing years of substance abuse upon himself. He struggles through two more concerts, but the last 13 dates on the tour are cancelled while he gets treatment for substance abuse. He flies back to the USA for a month's rehab after which he stays clean and sober until his untimely death in 1990.

Completion of the "Soul to Soul" tour. 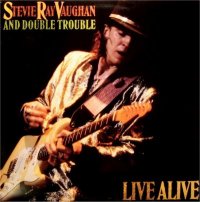 Start of the "Live Alive" tour, consisting 207 shows over 9 legs, in North America and Europe.

After eight years of marriage, Stevie and Lenny file for divorce. The divorce is attributed to jealousy and unfaithfulness.

Completion of the "Live Alive" tour. 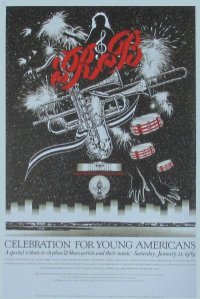 Start of the "In Step" tour comprising 136 shows over 6 legs, in the United States and Canada. Legs 3 and 5 are co-headlining with Jeff Beck and Joe Cocker respectively. 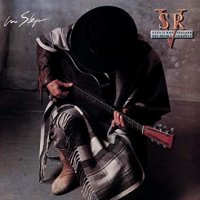 Stevie performs his second show for Austin City Limits. Crossfire is played, which is Double Trouble's only song to make number 1 on the Hot Mainstream Rock Tracks.

The band wins a Grammy Award for "Best Contemporary Blues Record" with "In Step".

Stevie performs on MTV Unplugged, playing “Pride and Joy,” “Testify” and “Rude Mood” on acoustic 12-string guitar. A fourth song, “Life Without You” is started, but aborted after a few bars.

All five albums have sold over 500,000 copies and certified gold.

Stevie plays the first of 2 shows at Alpine Valley in East Troy, Wisconsin, in front of a capacity crowd.

Stevie and the band play  their second concert at Alpine Valley. It is sold out with a 30,000 capacity crowd and features an encore jam comprising Stevie, Eric Clapton, Buddy Guy, Jimmie Vaughan and Robert Cray.

Completion of the "In Step" tour.

Death of a Legend

After performing with Eric Clapton, Buddy Guy, Jimmie Vaughan and Robert Cray Stevie boards a helicopter bound for Chicago. Shortly before 1:00am The helicopter crashes into a hill in poor visibility about 1am, killing Stevie and 4 others on board. A later investigation finds the primary cause to be pilot error.

Stevie's funeral takes place at Laurel Land Cemetary in Dallas. There are estimated to be between 1500 and 3000 guests in attendance, including Stevie Wonder, Bonnie Rait, Jackson Browne, Nile Rogers, Kim Wilson and of course Chris Layton and Tommy Shannon. 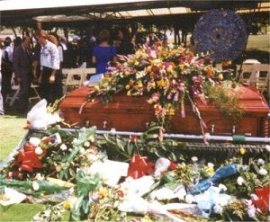 The album "Family Style" is released. 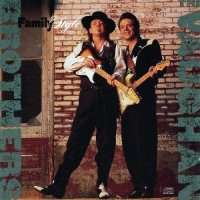 Stevie and Jimmie win a grammy for their Family Style album and also for the track D/FW.

Stevie wins a grammy for "The Sky is Crying" album and also the track "Little Wing".

The Stevie Ray Vaughan Memorial statue is unveiled on Town Lake, Austin, TX. The statue becomes a popular attraction for locals and tourists. 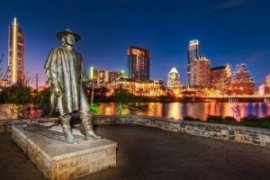 Stevie is inducted into the Blues Hall of Fame, which was established in 1980.

Rolling Stone magazine ranks Stevie No 12 on it's list of 100 Greatest Guitarists, writing that the musician "absorbed the styles of just about every great blues guitarist" and is "still inspiring multiple generations of guitarists" despite his death.

Stevie is inducted into the Rock'n'Roll Hall of Fame in Cleveland, Ohio