A very rare untorn ticket, this one came from the Estate of Chesley Millikin.
COLLECTION OF CRAIG HOPKINS 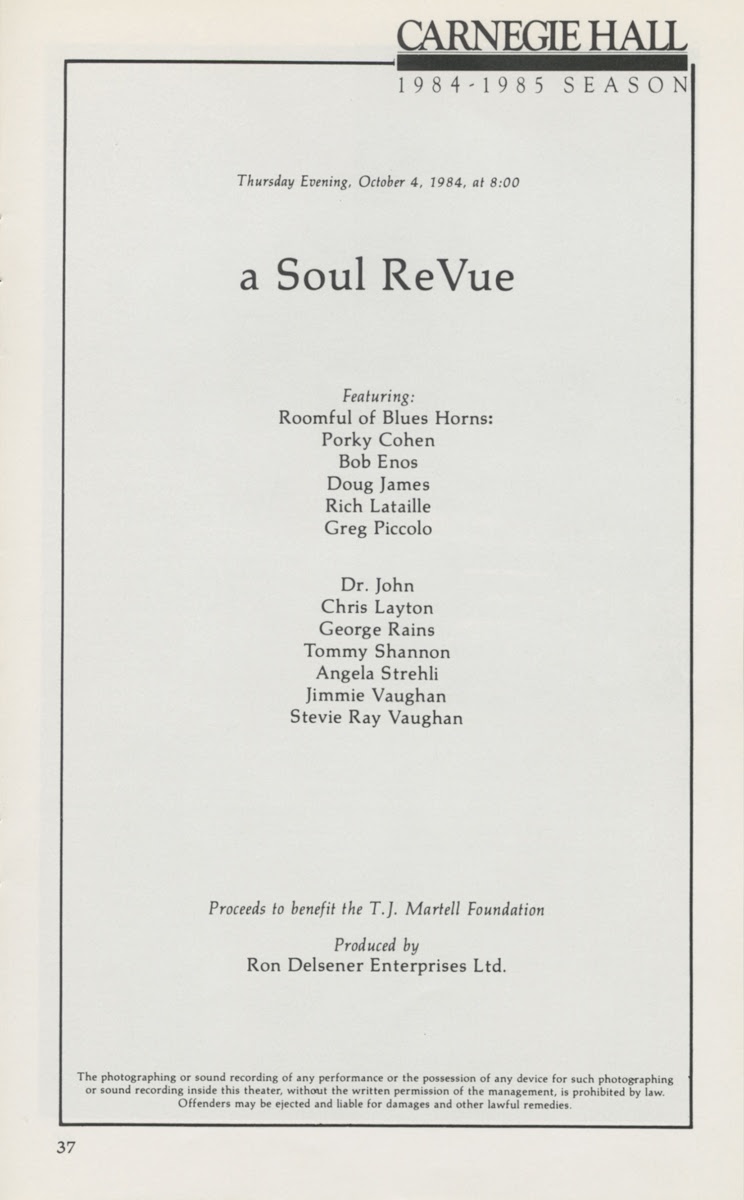 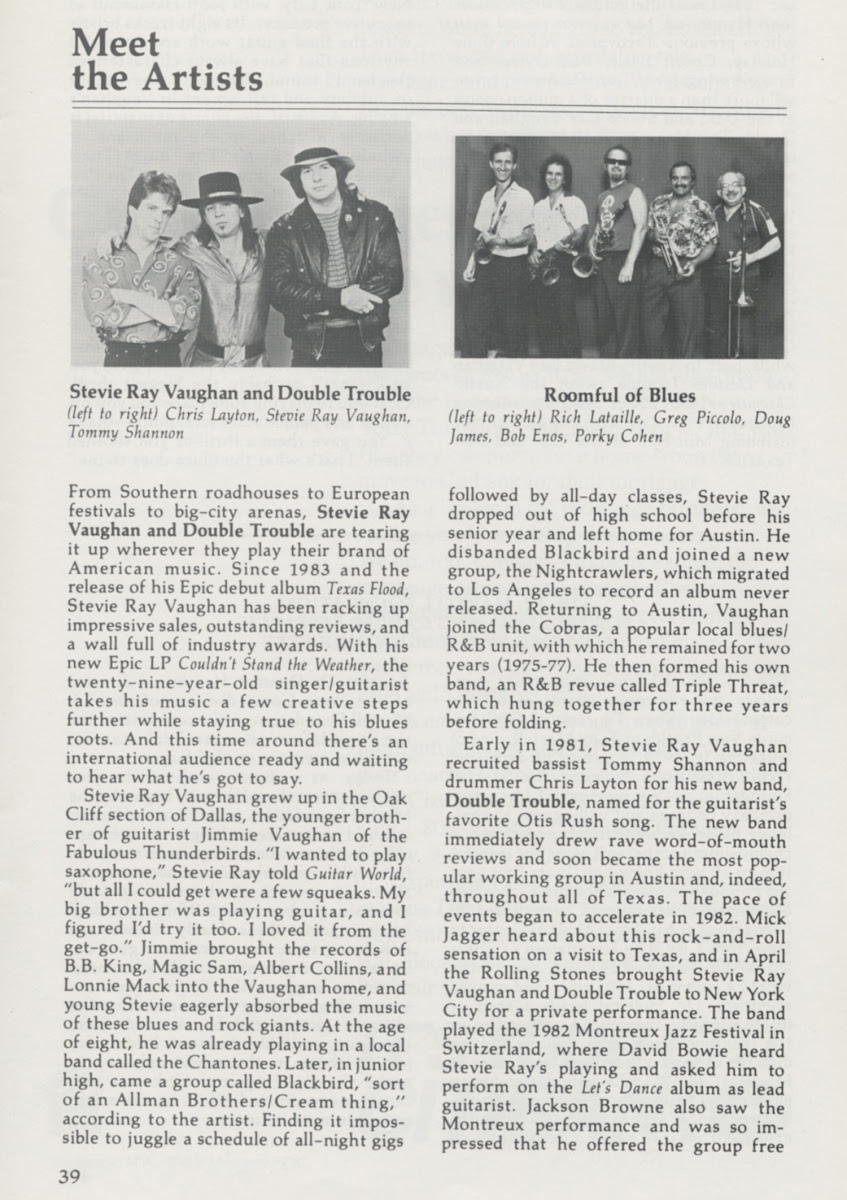 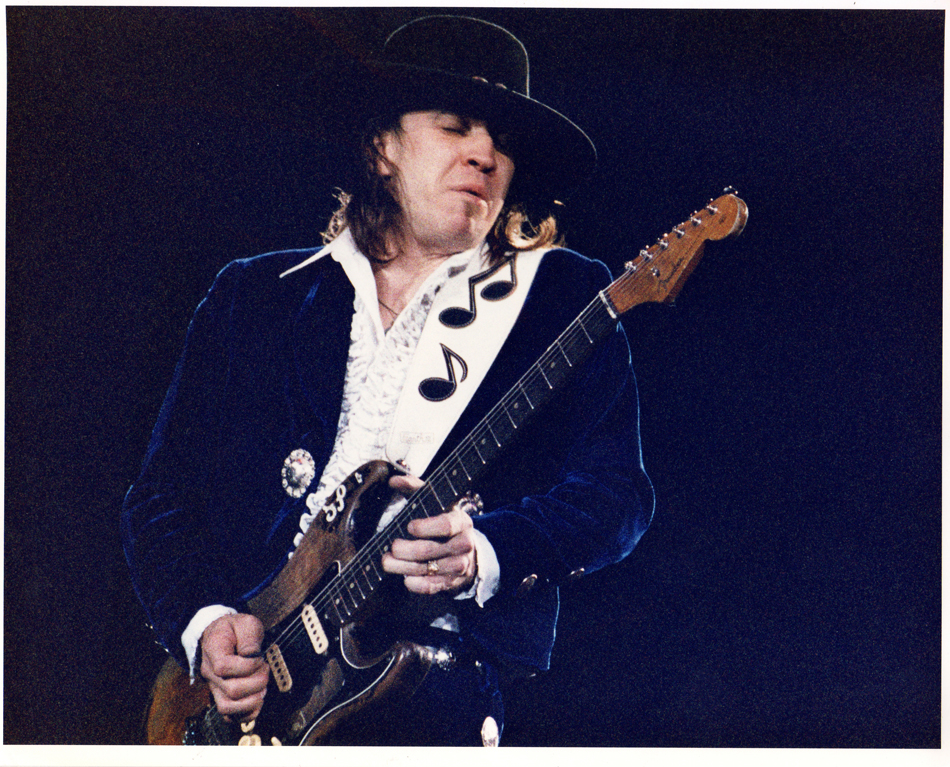 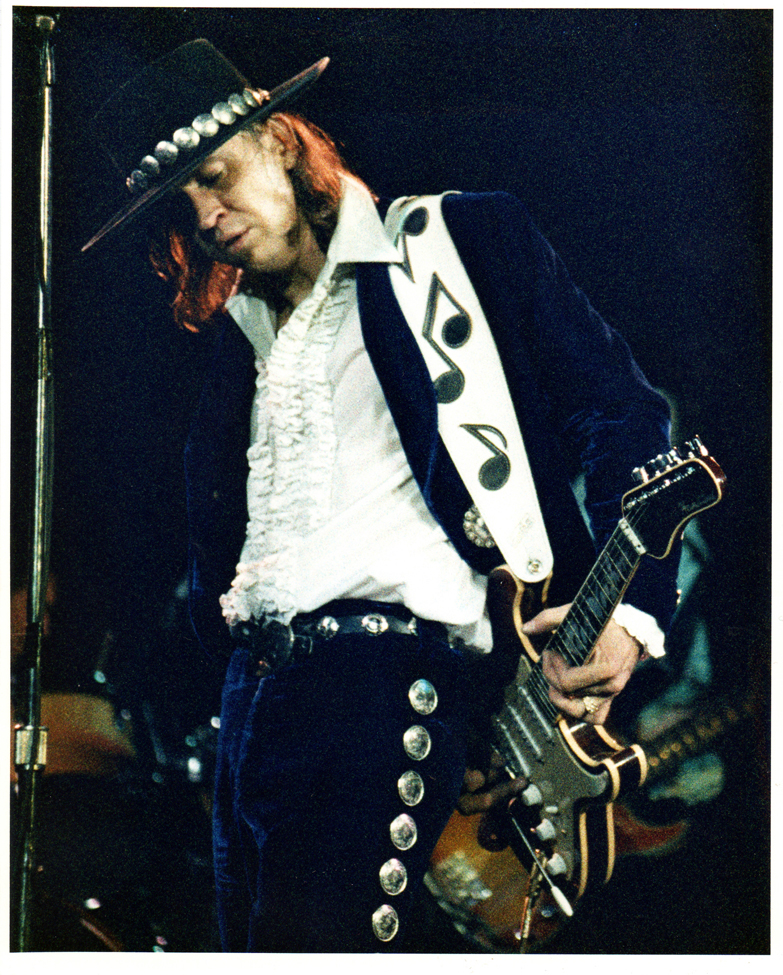 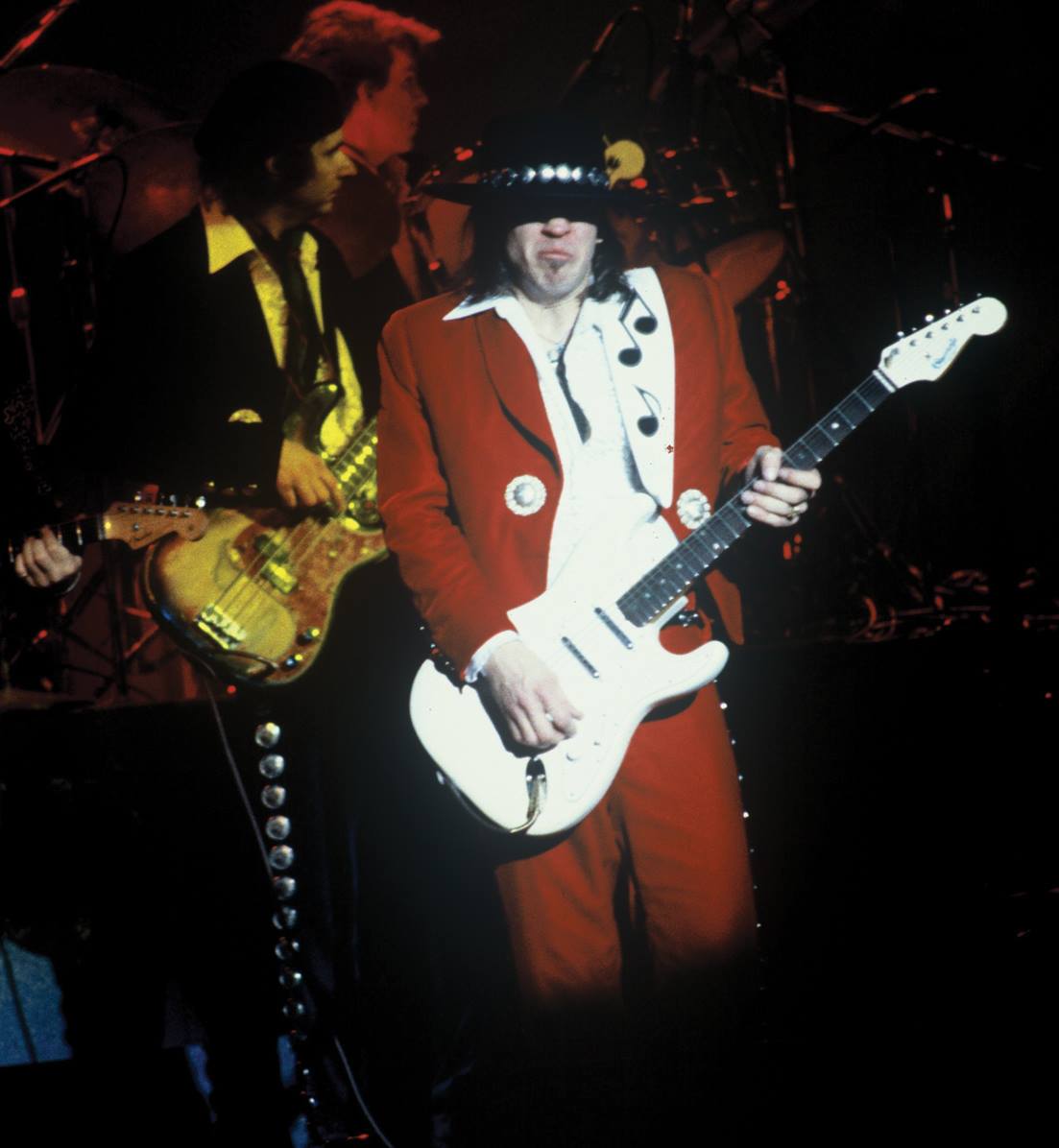 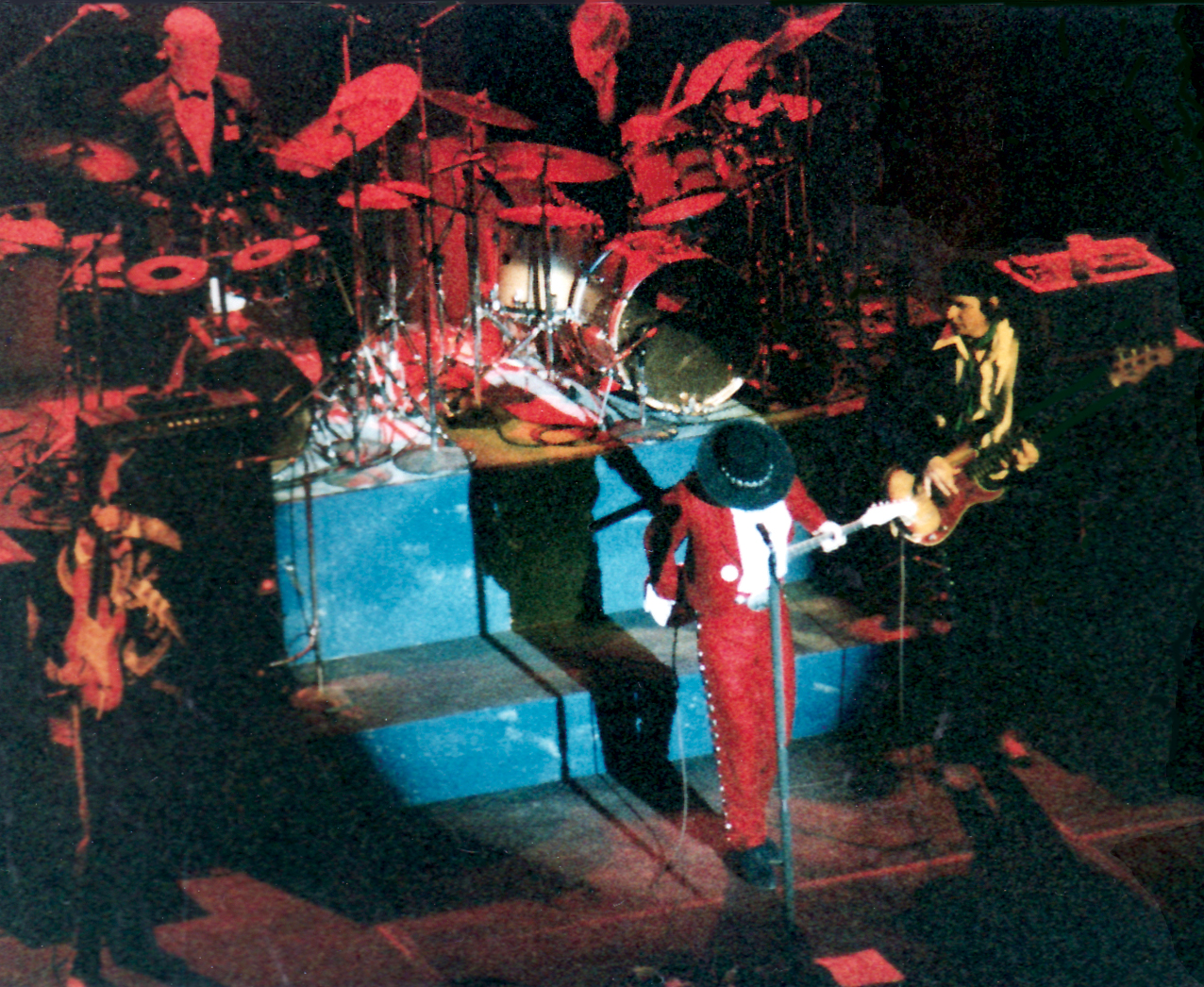 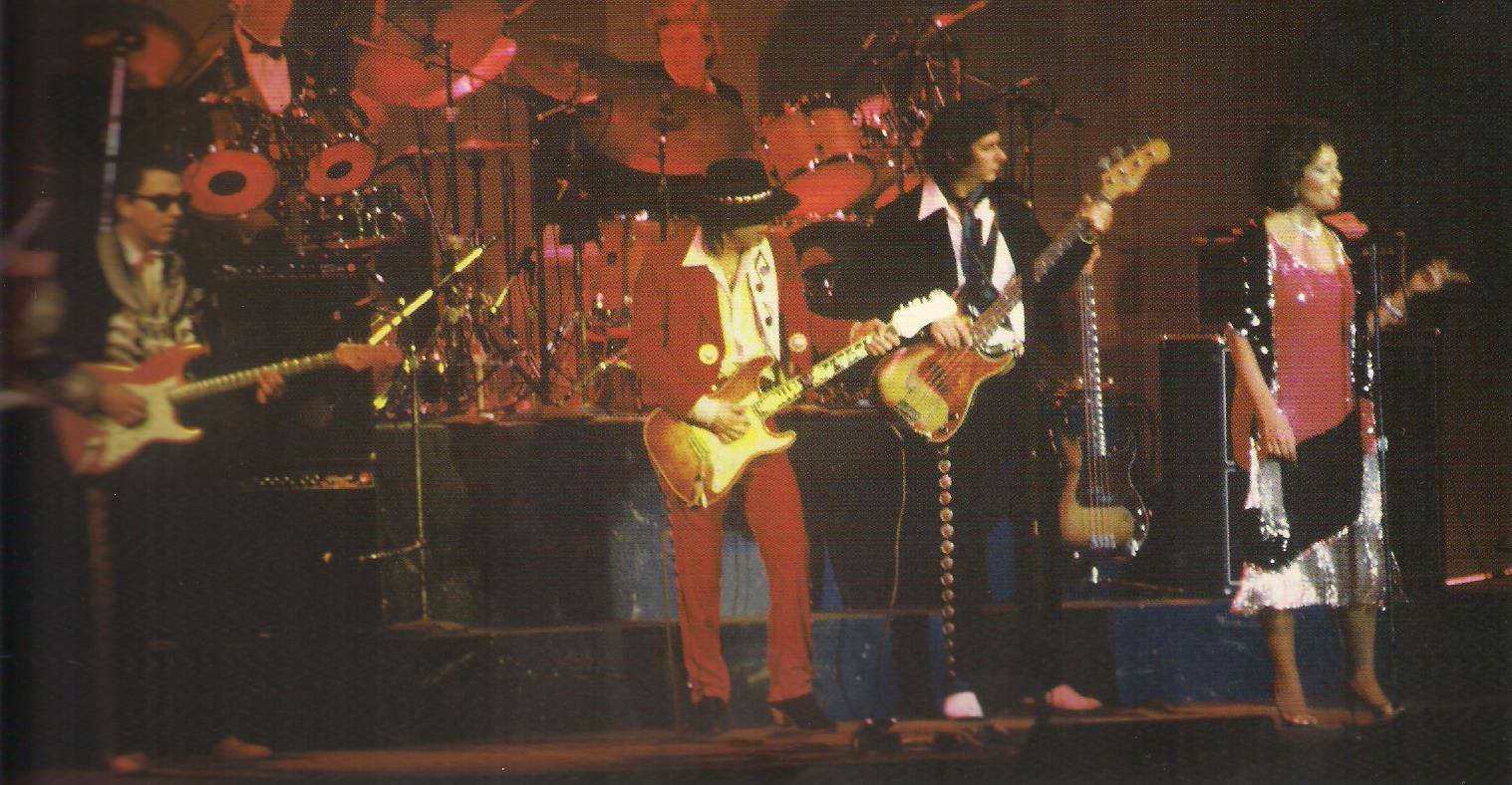 THERE'S nothing like a hot guitarist to get the men in a rock-and-roll audience on their feet and screaming. At Carnegie Hall, where the 29-year-old Texas guitar virtuoso Stevie Ray Vaughan led a "soul revue" on Thursday, there were moments when the staid auditorium became a whistling, stomping roadhouse.

A veteran of the southern bar band circuit, Mr. Vaughan was discovered in Texas two years ago by the Rolling Stones, and his style is some ways the culmination of a blues guitar tradition that runs from Robert Johnson through Jimi Hendrix. Although he is able to play in almost any idiom, Mr. Vaughan is at heart a southern honky-tonk guitarist-singer whose taut phrasing and steely muscularity of tone remain fairly strictly within a raw country-blues genre.

Even though his playing incorporates many of the psychedelic effects of Cream and Jimi Hendrix, one rarely senses that he is using aural phantasmagoria to try to explode and re-invent the blues. On the contrary, he is a classicist who fits the sounds of Mr. Hendrix's anarchic fireworks firmly into a blues context.

Stevie Ray Vaughan's orthodoxy was handsomely displayed on Thursday at Carnegie Hall. In the first half of the concert, he and his trio, Double Trouble, played a set that embraced a wide range of southern blues styles and included special brief homages to Chuck Berry and Cream. For the second half, Mr. Vaughan was joined by a number of blues musicians, including the five-man horn section of the New England band, Roomful of Blues, the pianist Dr. John, and the singer Angela Strehli. Their blaring set, though filled with verve, was seriously muddied by Carnegie Hall's acoustics, which rarely go well with highly amplified music.