September 13, 1984: Memorial Gymnasium, Nashville, TN
with Will Rambeaux and the Delta Hurricanes 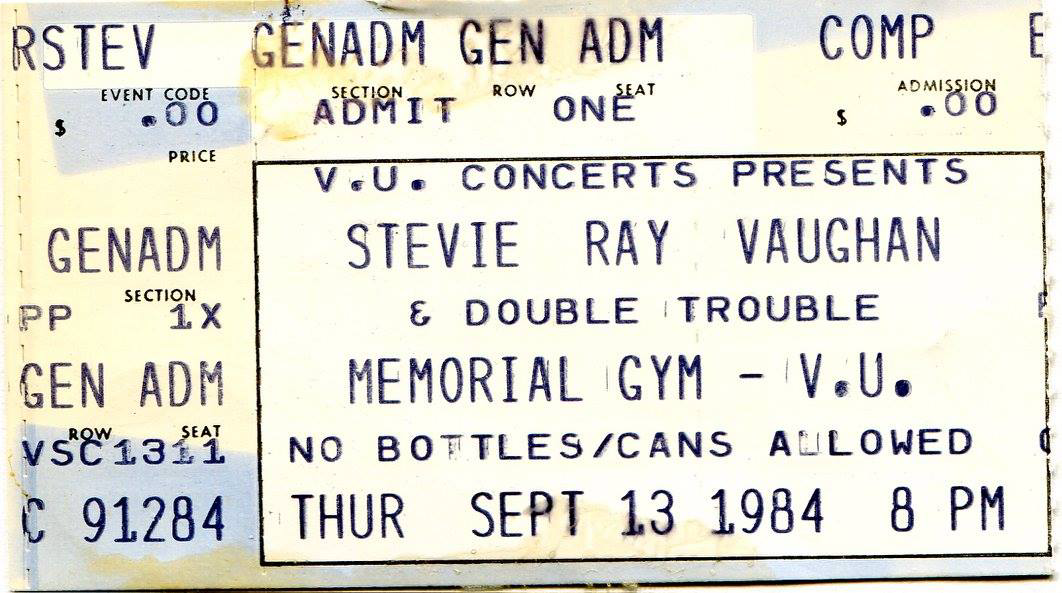 By the time the concert was over last night, the students and guests were drenched with sweat and saturated with soul. It was hotter than a Texas roadhouse in there, but it sure felt good.

Despite the fact that the basketball cavern has the acoustics of an airplane hangar, Vaughan sang with true feeling and displayed the fleet-fingered string stretching that has made him the most celebrated young blues guitarist in the world. He sounds like he just doesn't have off nights. And maybe that's why both of his albums Texas Flood (1983) and Couldn't Stand the Weather (1984) are hot sellers as well as critical successes...

...And he shows his gratitude for the great black bluesmen, past and present, every time he talks. Stevie's sense of brotherhood extends to many musicians. Of Texas' rise to prominence as a blues center he says, "There's so many musicians there that care so much and there's so much comraderie between them that it was bound to happen."

Whether whites should or could play the blues used to be a big issue in popular music. No more.

"The music is black regardless. And I mean that in a positive way, with as much respect as I can muster. It's just important that the tradition be maintained."

If last night's show is any judge, Stevie Ray Vaughan does more than "maintain": He furthers the tradition, gives much more than he gets. The gentle-natured, good-humored, immensely likable Vaughan says he's the type of picker who will play for the rest of his life.