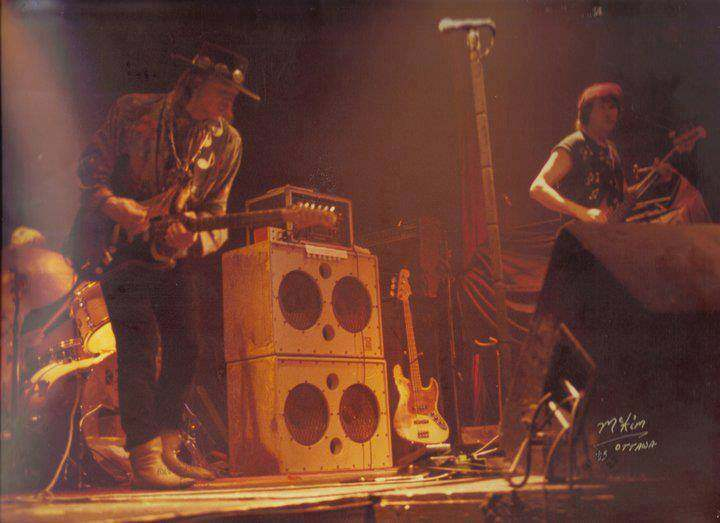 There were guitar nutters jammed to the rafters to see for themselves whether this axe-slinging Texan upstart was really as good as all this hullaballoo says he is.

No one was disappointed, which was no surprise. Stevie Ray Vaughan's recently released album Texas Flood revealed some of the best guitar playing since Jimi Hendrix, and a person just can't fake that kind of genius no matter how fancy the studio technology gets.

One is at a loss to find the proper expressions to fit what Vaughan does. To find words strong enough tends to ends up sounding like helpless ranting, raving hyperbole. Suffice to say that he combines the best of all the great guitarists and although his influences shine through from time to time, he comes out the other end as a virtuoso with a distinct touch.

Vaughan exudes intense devotion to his music. He has a nasty rock and roll heart along with having the blues real bad. The combination of variables produces electrifying results. The effect on the audience was to evoke a endless series of spontaneous whoops and screams as the guitarist dug into a groove that hit some tender spot with someone. Every song seemed to be a bigger highlight than the one before. It didn't seem to matter what end of his scope he was playing from. Be it Texas boogie, the low-down blues or an R & B shaker, the results were the same.

Vaughan plays a beat-up Fender with the wood so worn on the edges that it looks as though he rifled it out of a junk heap. It seems all the more miraculous that he can produce the magic he does from it.

But the axe fits Vaughan's style and he has plenty of that. He looks like a cross between a gypsy and a character played by Keith Carradine in one of those westerns. His face is obscured by a black Texan hat. Scarves and heavy silver jewelry hang around his neck over a peacock tattoo done by Painless Bill of Corpus Christi. He has a silent, cool image without giving the impression that he's trying to be that way. Nor does he say much to the crowd, but then he doesn't need to. His guitar says everything that needs saying.

The quiet manner should not lead one to think that Vaughan is timid. He is prone to a certain amount of antics such as jumping on his guitar or playing it behind his head. Despite what it may sound like, none of this is overdone or effected at the expense of the music. He does these things in a non-plussed manner and manages to get away with it without looking like a ham. In the end it only serves to stir up the fever even more.

Vaughan didn't work into it slowly. He sent out the first note like a bolt of thunder. After two songs, one 19-year-old fan commented "I've played guitar since I was 7 and I've taught for the past three years. This guy is very good," eyes widening at the understatement. "He's gonna be somebody real big."

That seemed to describe the mood in the room. There was a feeling that we were witnessing someone who was about to become a guitar hero. It has been so long since there's been one. Everyone was enjoying the intimacy of the club setting. Undoubtedly it will be a big hall next time and as a headliner. No one is stupid enough to let Vaughan open for them.