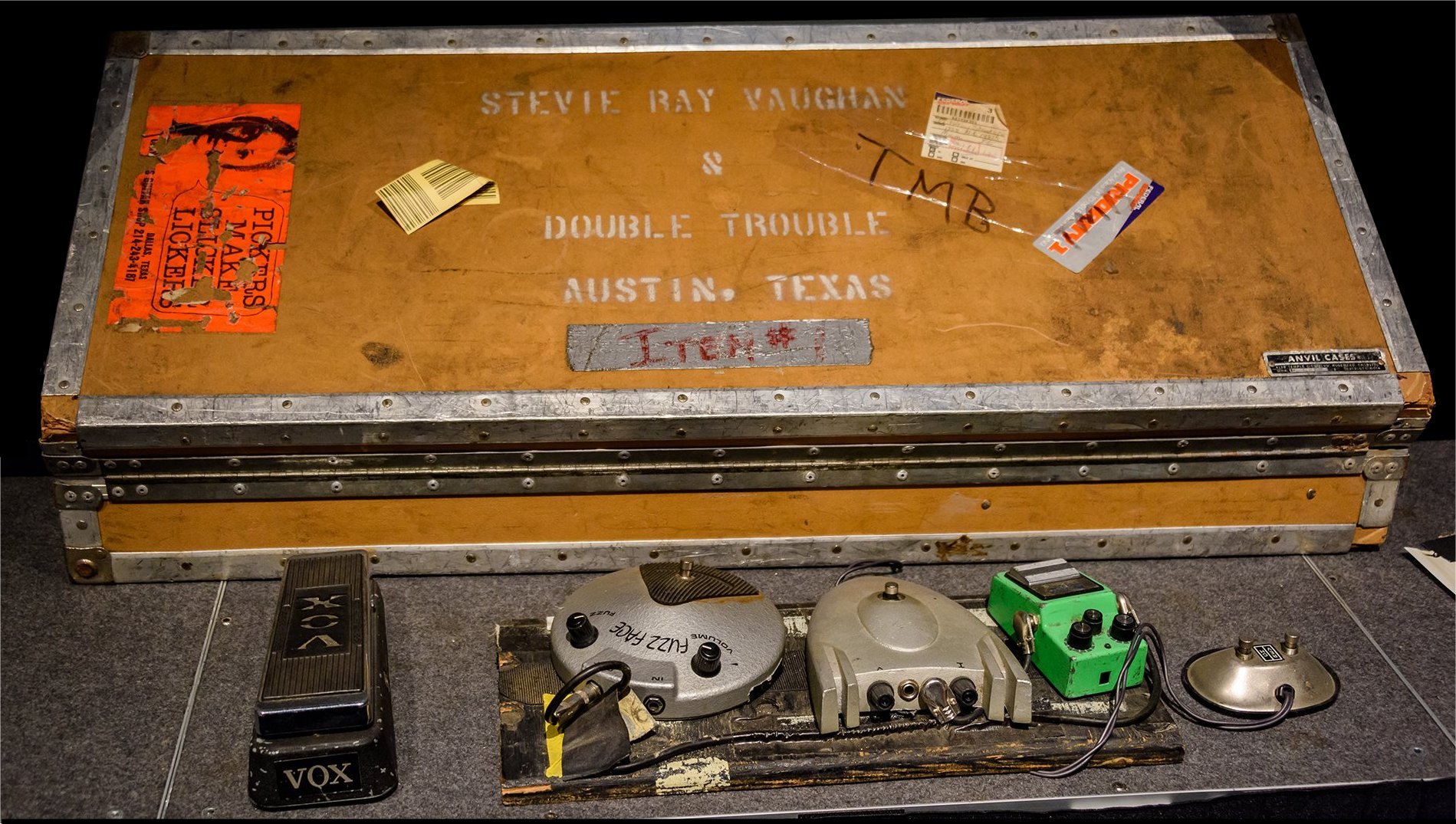 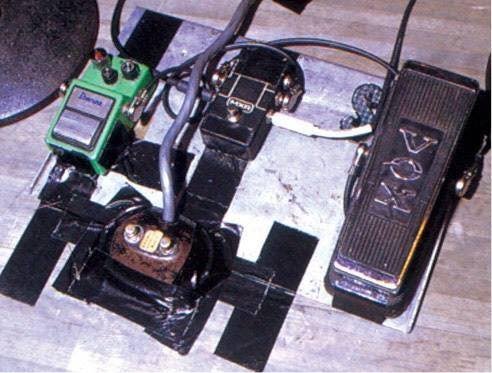 A Video History of Stevie's Effects 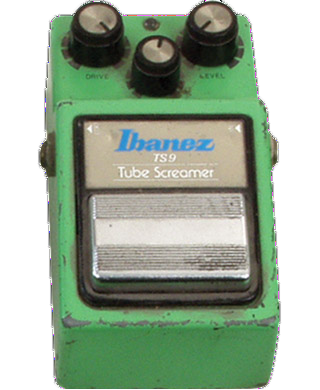 According to pedal-geek lore, Vaughan was a big fan of the TS808 version of the Ibanez Tube Screamer, but evidence in the form of stage photos, live videos, insurance documents and customs declarations reveal that the TS9 version of the Tube Screamer was his preferred choice from 1982 through most of the Eighties.

Vaughan usually used his TS9 to provide a clean boost to his Fender Vibroverbs for solos, with the level control all the way up and the drive control set to relatively low gain.

In 1988, a new Ibanez TS10 Tube Screamer replaced the TS9 in his pedal board, which Vaughan generally used to generate high-gain distortion (with both the drive and level controls boosted) that wasn’t otherwise available from his Dumble and Marshall Major rig.

The lush rotating-speaker effects heard on Vaughan tracks like “Cold Shot” and “Couldn’t Stand the Weather” were generated by a Fender Vibratone speaker cabinet.


Similar to a Leslie Model 16, the Fender Vibratone is designed for gigging guitarists and features a rugged, roadworthy cabinet covered in black Tolex.
More importantly, the Vibratone is also designed for use with a standard guitar amp and features a guitar speaker that emphasizes crucial midrange tones instead of the full-range, two-way woofer and tweeter speaker array found in most Leslie cabinets.
Fender sold the Vibratone from 1967 through 1972, and it is still considered one of the best true rotating speaker effects for guitarists. 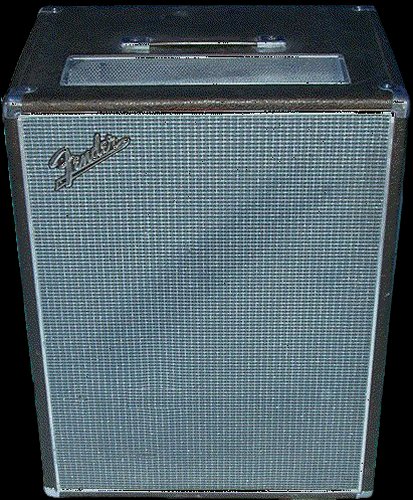 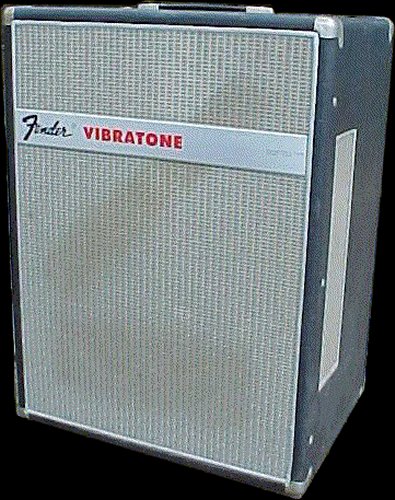 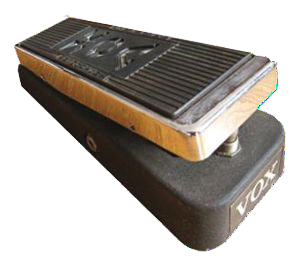 Stevie's wah pedal was the Vox V846 that originated from the Sixties and had originally belonged to Jimi Hendrix. Stevie's brother Jimmie, acquired the pedal from Hendrix when Jimmie’s band supported The Jimi Hendrix Experience in Fort Worth, Texas.

Stevie also owned several other Vox wah pedals and was apparently very fond of an early Seventies version with a Japanese TDK inductor.

Vaughan used the Vox wah on his Hendrix covers and 'Telephone Song' on the Vaughan Brothers’ album "Family Style"  and he famously used two wahs at once to record 'Say What.'" 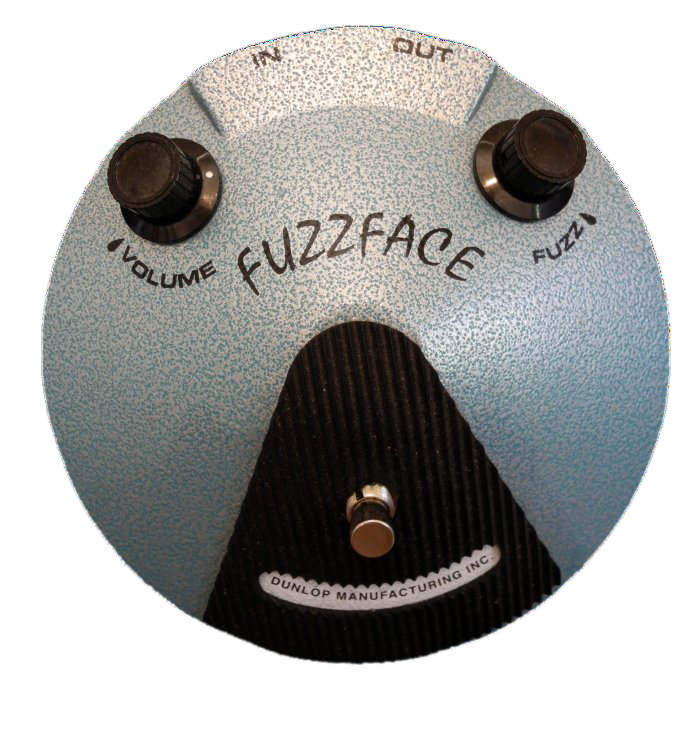 Stevie tended to prefer clean tones and natural tube-amp overdrive, but in 1988 he added an original Sixties Dallas-Arbiter Fuzz Face pedal to his rig when he became obsessed with emulating Jimi Hendrix’s signature sounds.

Unfortunately, the Fuzz Face’s germanium transistors were extremely unreliable when exposed to hot stage lights or the sun during outdoor gigs.

Stevie collected several Fuzz Face pedals, and he would try several during sound check to choose the one he thought sounded best that particular day. Eventually, he got tired of the unreliable transistors in his Fuzz Face pedals, so he had them modified by his amp tech César Diaz, who later used the modifications as the basis for the Diaz Texas Square Face pedal. 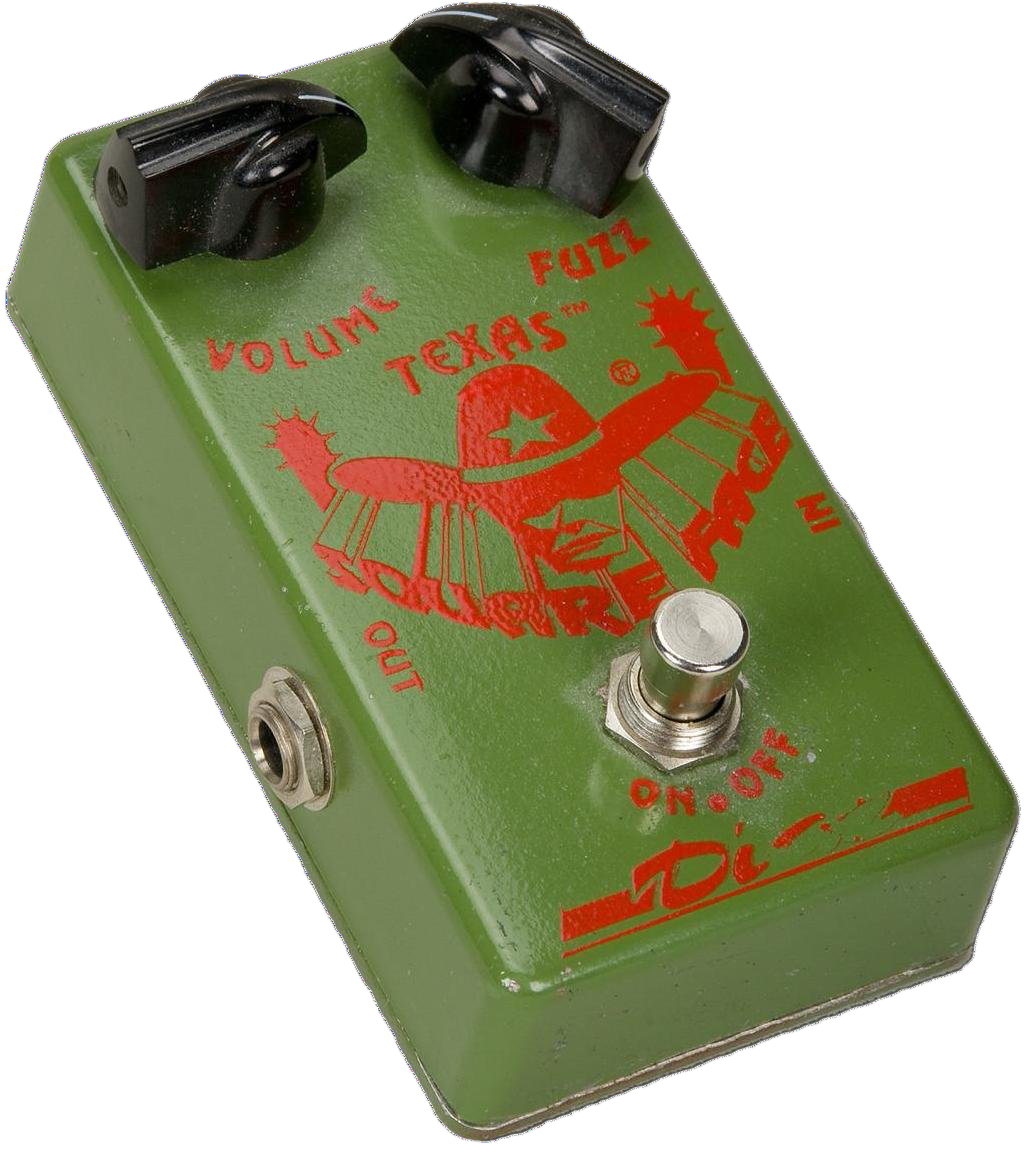 The Texas Square face was originally designed as a replacement for Stevie's fuzz faces, which were always dying.

Cesar Diaz built his circuit into one of Stevie's dead fuzz face boxes and Stevie used it until his unfortunate death.

The square face is similar to the Dallas Arbiter Fuzz Face, has volume and fuzz knobs, but comes in a small MXR distortion+ sized box. They have a DPDT switch for true bypass. 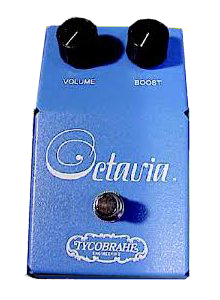 Originally used by Jimi Hendrix, this pedal was redesigned in the mid 1970s by Tycobrahe. Stevie owned 9 of these fuzz pedals and used them to emulate the Hendrix sound, along with his Tube Screamer. He only used them for a brief period. from 1989 until his death.

His guitar tech, Rene Martinez, says that Stevie thought the Tycobrahe pedal produced the best Octavia effect he had ever heard. Vaughan especially liked how the Octavia sounded when used along with a Tube Screamer. 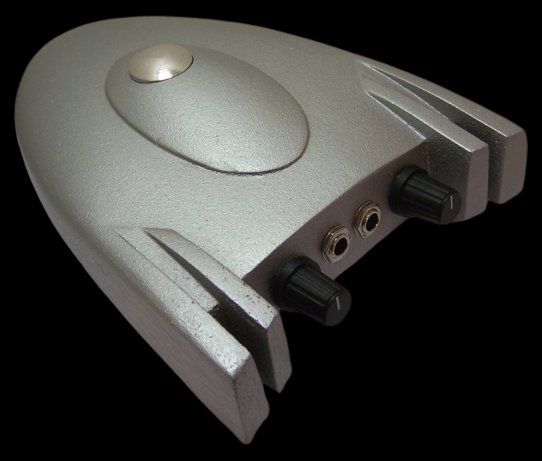 This effect was designed in early 1967 and was another pedal that Jimi Hendrix used. Stevie used this as part of his on-stage set-up.

The Octavia produces a sound that is an octave higher than the note you are actually playing, causing a doubling effect.

The sound is noticibly different if a fuzz unit is in front of the Octavia and Stevie placed the Octavia after his fuzz and wah pedal in most cases so it would react to the combined effects of both the wah and one or more fuzz boxes. 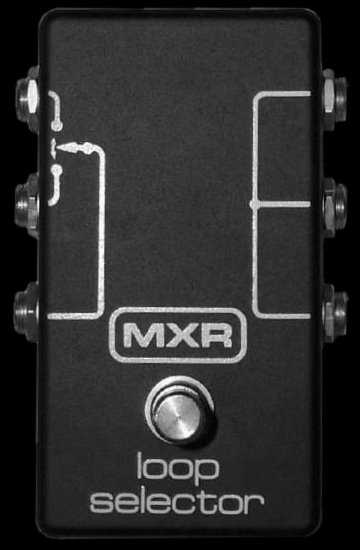 It allowed him to toggle between two separate effects chains or two different amps / channels.

He also used it when playing live to take his Tube Screamer in and out of his signal chain. 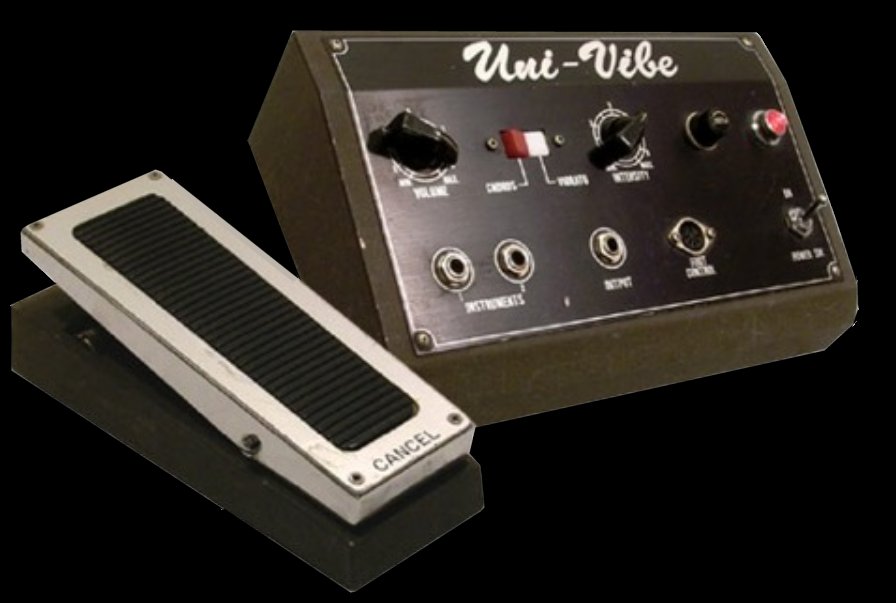 The Uni-Vibe (or UniVibe), also known as Jax Vibra-Chorus, is a footpedal-operated phaser or phase shifter for creating chorus and vibrato simulations for electric organ or guitar.

Designed by audio engineer Fumio Mieda, it was introduced in the 1960s by Japanese company Shin-ei, and then manufacturerd in North America by Univox in 1968.

A longtime Hendrix fan, the Uni-Vibe is another of Stevie’s “Hendrix inspired” pedals. The Uni-Vibe approximated the sound of a Leslie rotating speaker cabinet but Vaughan usually preferred the effect given by his Fender Vibratone. 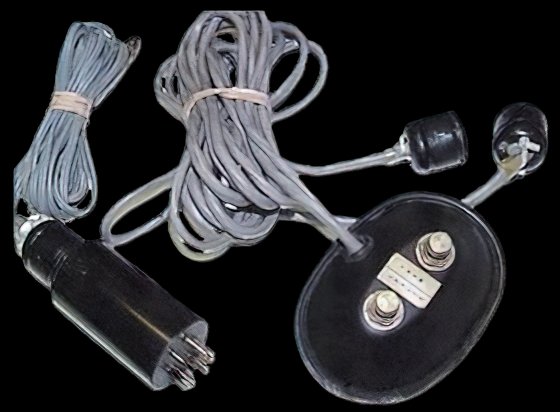 This is the stock footswitch for the Fender Vibratone. The left switch turned it on or off and the right switch changed the speed of the Leslie effect between slow and fast. You can see Stevie do this in many videos.

Introduced in 1984, the Dytronics Cyclosonic Panner was a revolutionary analog auto-panner that created stunning, 3D-panning and modulation effects, imparting instant vibe and stereo character to any source.

The original Dytronics Cyclosonic Panner was a high-end outboard studio effects unit that offered both stereo and quad-stereo support. It achieved near-mythical status for its one-of-a-kind, proprietary 3D effects and its impressive tonal signature. The unit was marketed under two different brand names, Dytronics and Songbird,

Stevie used this on the track "Riviera Paradise".

Although Stevie didn’t use the Roland Dimension D in his live rig, it was a secret weapon in the studio, where he often added it to his guitar tracks during mixing.

Vaughan first discovered the Dimension D while mixing his guitar tracks on David Bowie’s Let’s Dance and he liked how its subtle chorus effect thickened his guitar sound without changing his natural tone significantly like other chorus effects frequently do.

The Dimension D was used on the solos to “Mary Had a Little Lamb” and “Pride and Joy” on "Texas Flood" and most of the solos on "Couldn’t Stand the Weather". During mixing, Stevie would add the Dimension D effects himself via the effects send/return controls on the mixing console. 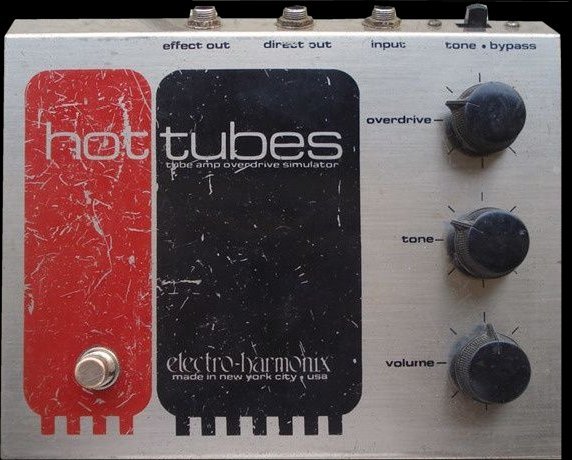 Stevie used this pedal during the Daytona Beach show on 25th March 1987. This is believed to be the only time he used it.