The following are the main venues that Stevie played at before he secured his first recording contract.
For a full list of venues, please see the full gig list, which can be found here.

Antone’s on Sixth Street and Brazos opened on 15th July 1975, founded by Clifford Antone. It started in his sandwich shop in Austin and soon there were guitars and amps in the back of the shop, and before long the blues had taken over. It was considered to be one of the best night clubs in America and one that would showcase legends like Muddy Waters, B.B. King, Jimmy Reed and dozens more.

Before long the large room, formerly a furniture store, also became a clubhouse for just-beginning Austin bands like the Fabulous Thunderbirds and Stevie Ray Vaughan’s Triple Threat Revue. Antone’s changed everything in Austin, and pointed a way forward in spreading the blues. Before long, blues musicians all around the country were talking about the club, and hoping to find a way to play there.
As Sixth Street developed in the late 70s and rents got raised, Antone’s moved to a building in West Anderson Lane near Burnett, North Austin. Once it was established there, icons like Ray Charles and James Brown came to to town and dazzled sell-out crowds. It was only at this location for around 2 years.
In 1981 a more welcoming location was found, a former pizza parlor on at 2915 Guadalupe near the University of Texas campus was established as the new venue. It remained here until 1997 and Stevie played there as recently as 1987, when he guested with Hubert Sumlin. 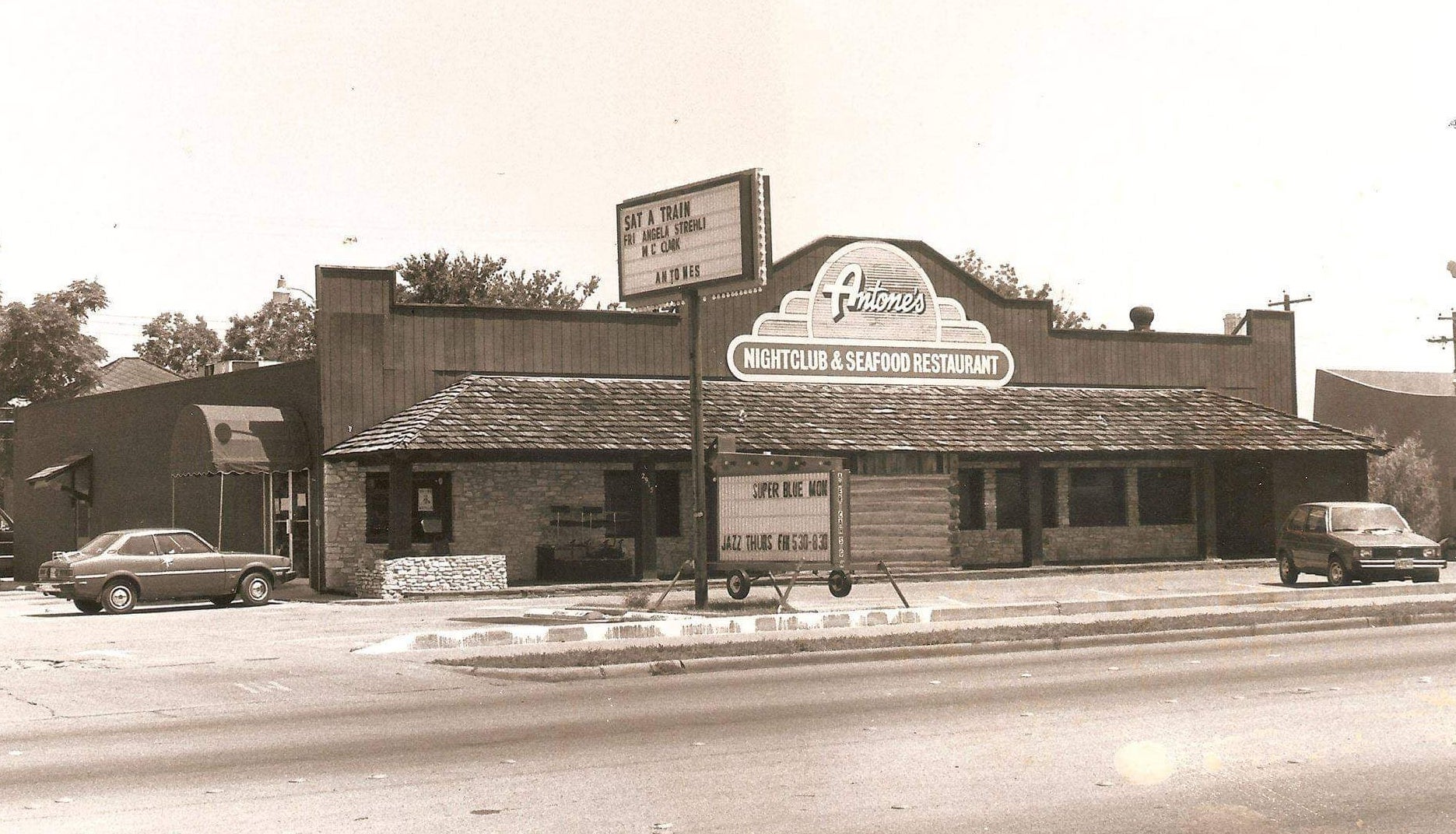 The third Antone's venue in Guadalupe

The Armadillo World Headquarters was an influential Texas music hall and beer garden in Austin at 525 1/2 Barton Springs Road – at South First Street – just south of the Colorado River and downtown Austin. The room held about 1,500 people, most of whom would just sit on the big floor in front of the stage covered with sections of carpet pieced together.

The venue existed from 1970 to 1980. The structure that housed it, an old National Guard Armory, was demolished in 1981 and replaced by a 13-story office building.

Stevie played his first gig there with Paul Ray and the Cobras in 1975 and continued to play there regularly until its closure in 1980. 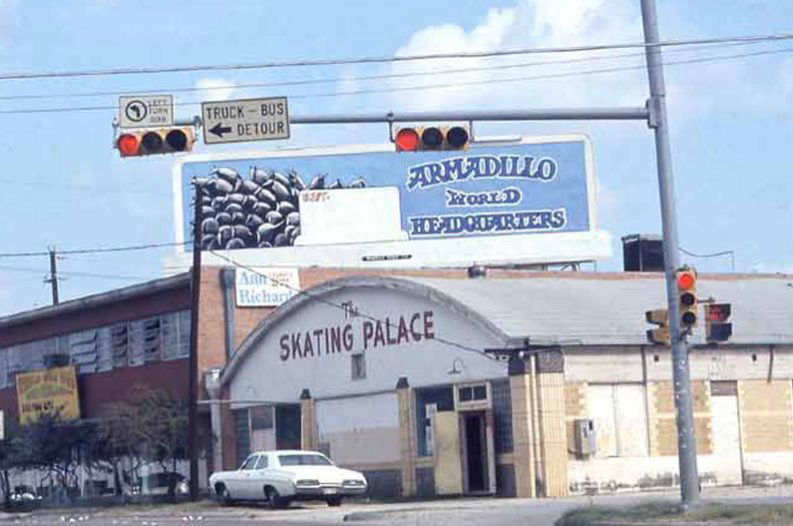 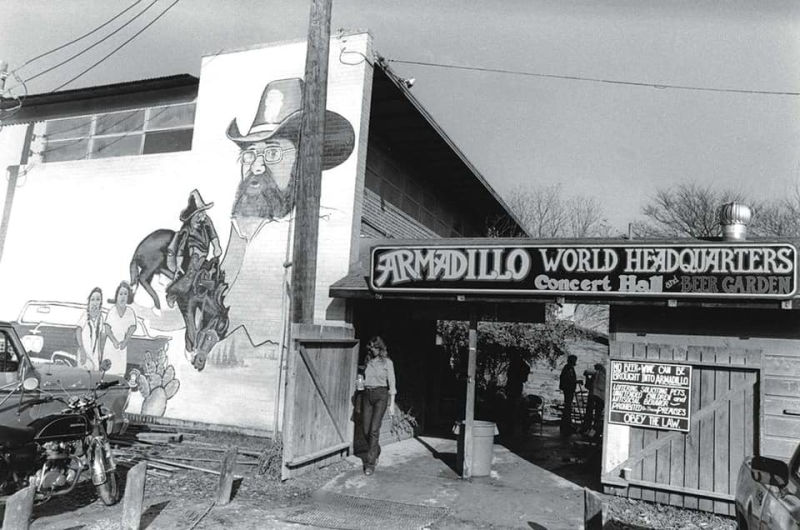 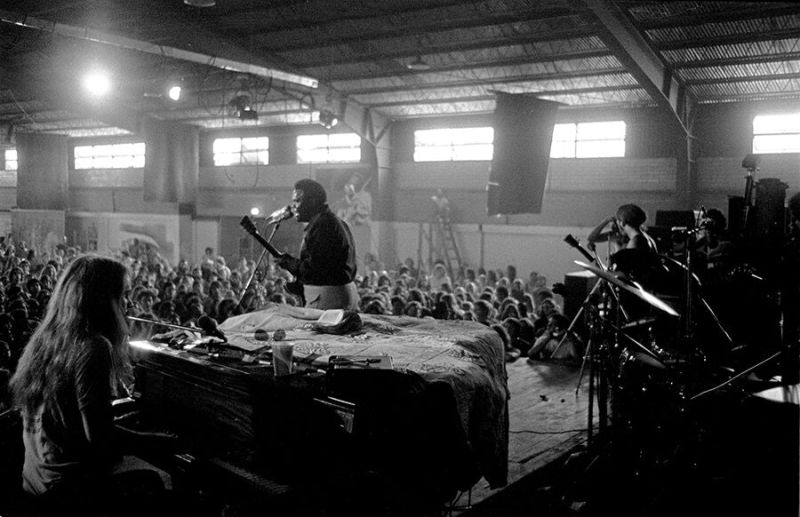 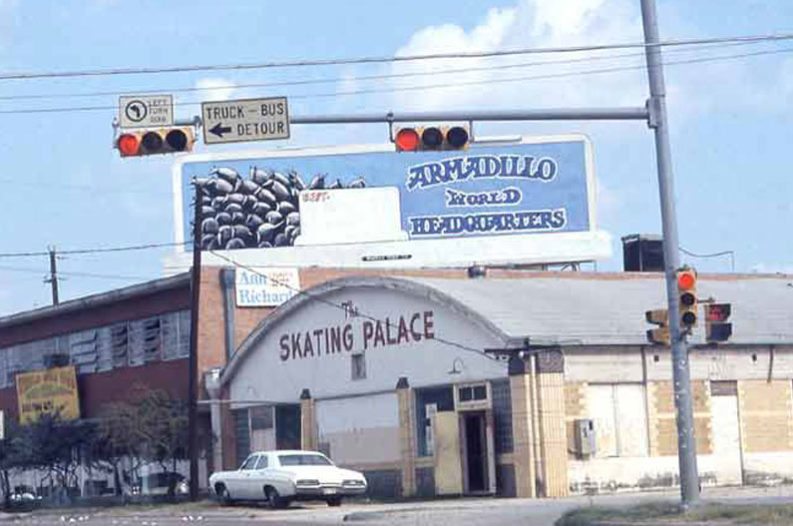 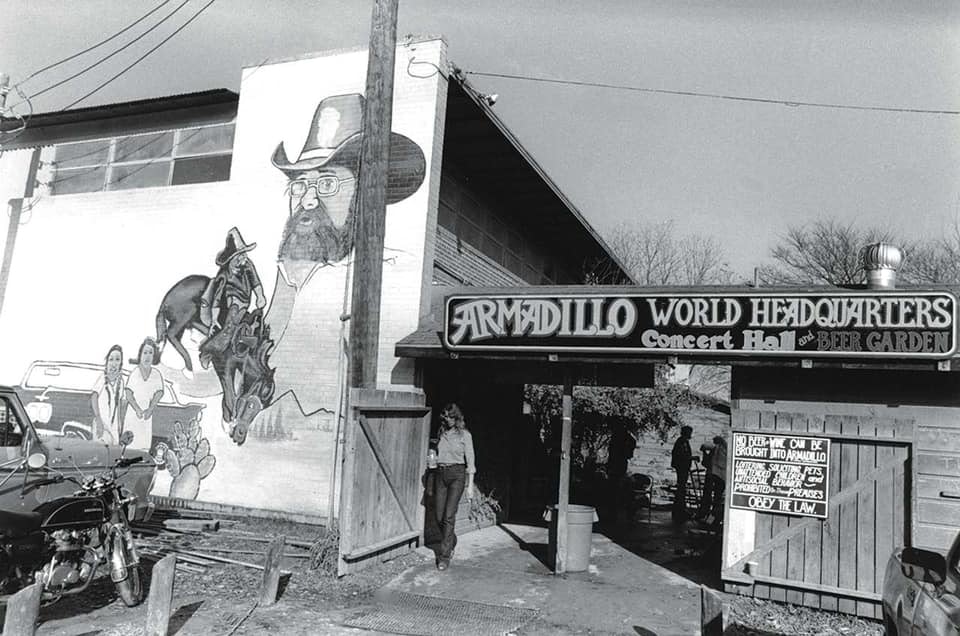 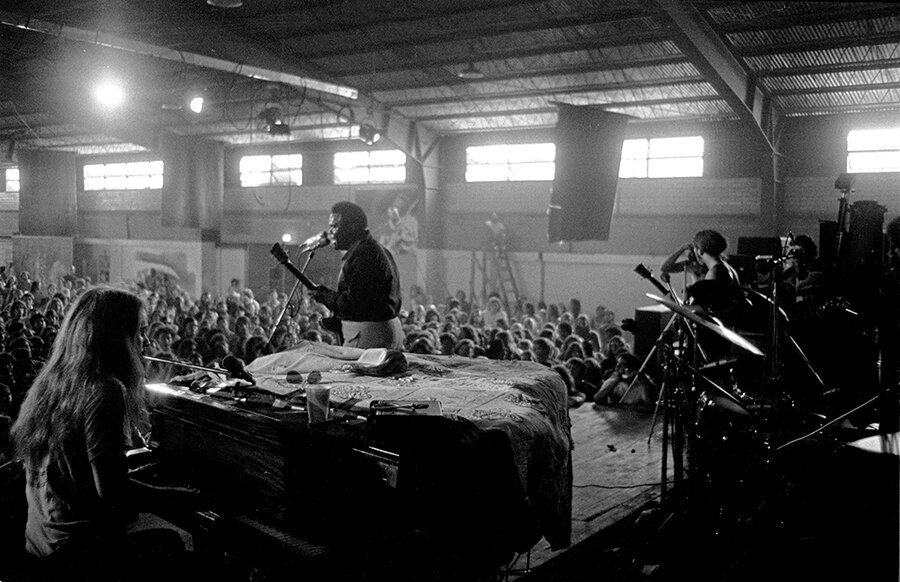 The Continental Club was founded in 1955 and is still open today. Stevie first played there in 1980 and continued to do so, until April 1983, just prior to the start of the Texas Flood tour. 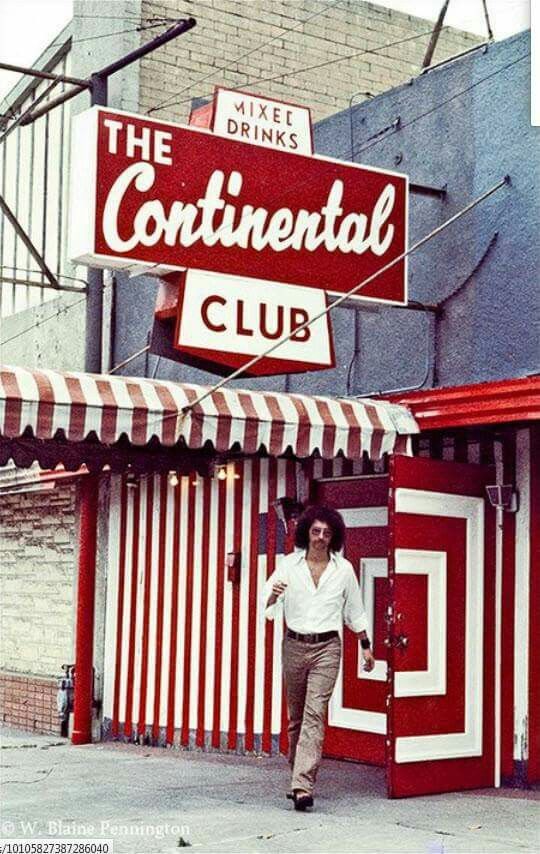 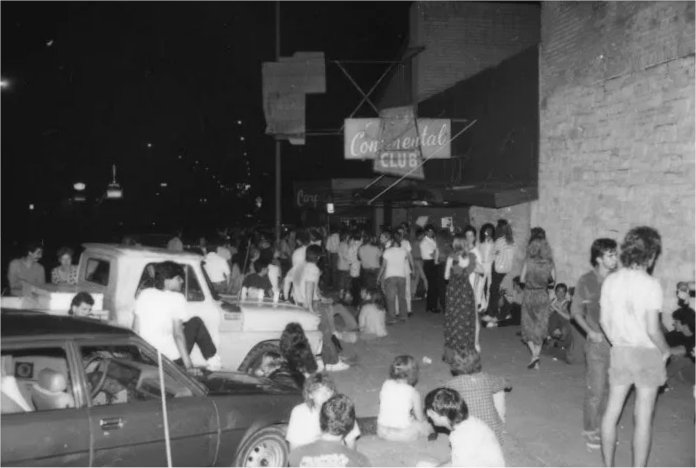 The One Knite was located at 801 Red River St, Austin, Texas, which was opened  in 1970 by 3 friends. It was an L-shaped club with a small stage at one end, and some rickety tables in front of the stage. The club had a coffin shaped door and there were old car parts hanging from the ceiling. Lock ins used to take place after the official closing time of 12:00am.
Stevie played here during his time with Paul Ray and the Cobras, in 1975-76. Jimmie Vaughan and Doyle Bramhall’s band Storm played every Monday night for five years.
The club closed its doors for the last time on 4th July 1976. 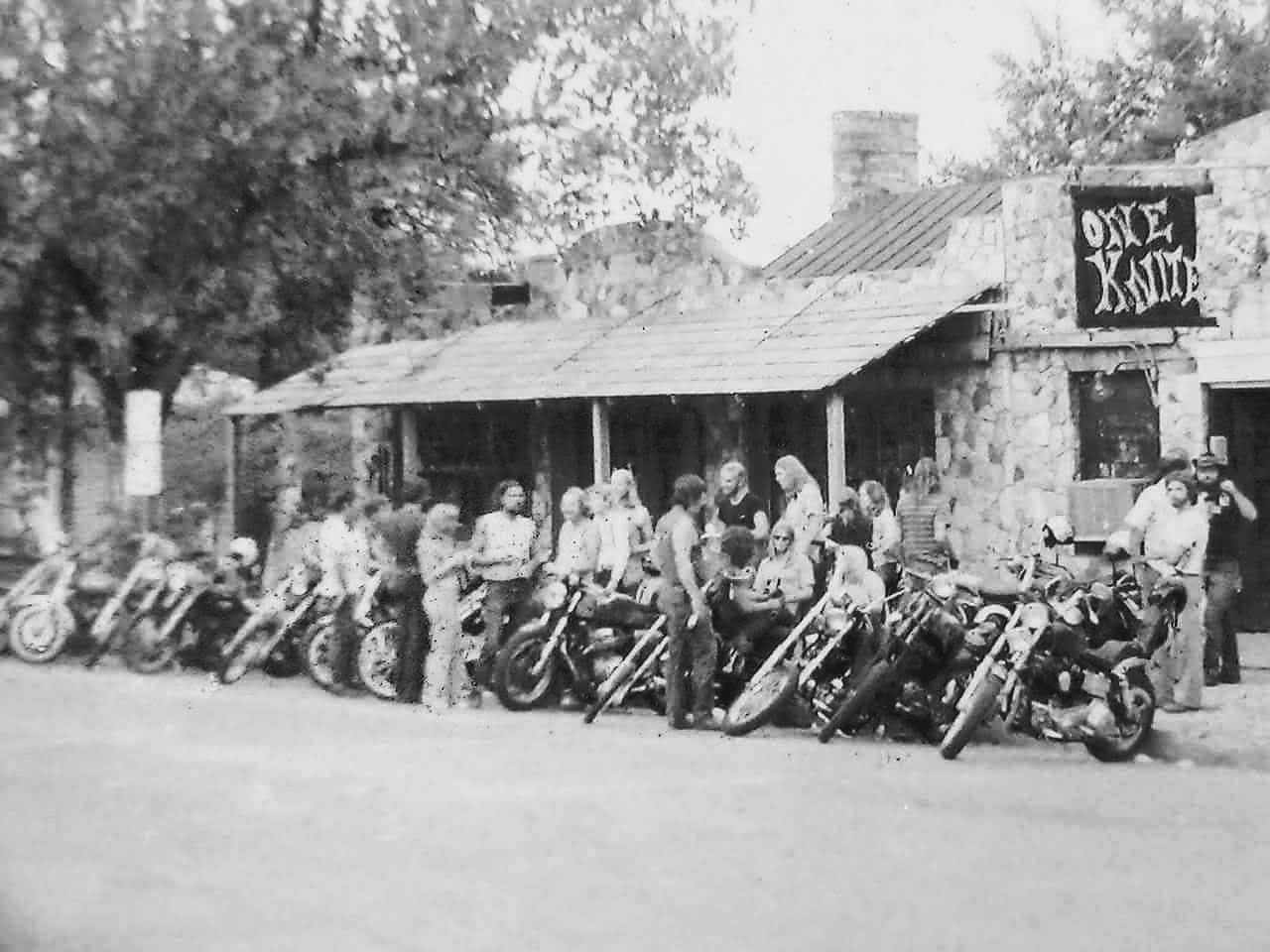 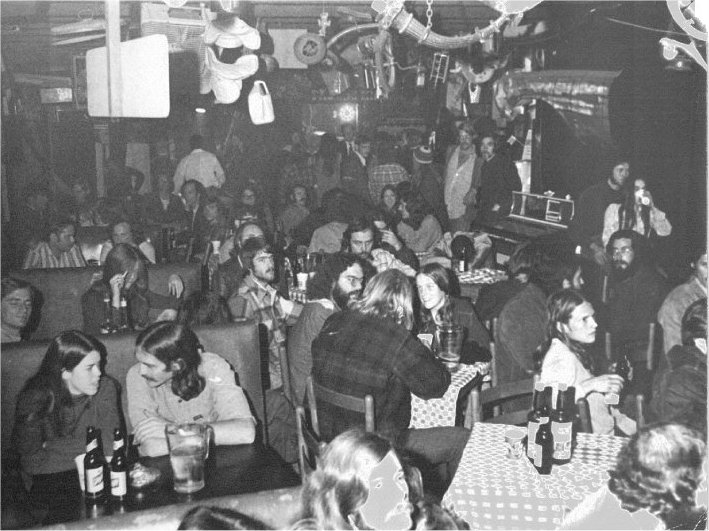 The complete One Knite documentary is available on either DVD-R, or as a digital download. It is a 45 minute documentary and provides a detailed look at this legendary club. It features interviews with Jimmie Vaughan, Paul Ray, Denny Freeman and others.

For more information on obtaining the documentary, please contact oneknitefilm@gmail.com.

The Texas Opry House was originally part of the Terrace Motel which opened in 1950. It was located on Academy, just a couple blocks or so east of Congress.

It was subsequently taken over by Willie Nelson, but closed in December 1974, due to his problems with the IRS. When he re-opened it in late 1975, it was renamed the Austin Opry House.

Stevie first played there in 1979 and continued to do so until March 1983, just before the start of the Texas Flood tour. 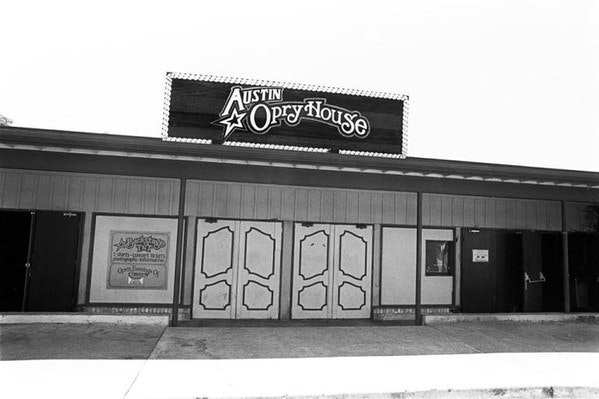 Raul's was a live music nightclub at 2610 Guadalupe Street in Austin, Texas in the late 1970s and early 1980s, which started off as a Chicano music venue, but later specialising in punk rock music. It was situated near the University of Texas campus. It was opened on 31st December 1977 and finally closed on 1st April 1981.

It was the first club of its kind in the city and, for a time, the only venue for punk/new wave bands. The more successful bands from that scene were the ones who broadened their fan base by also playing at other Austin venues, such as the Continental Club, Soap Creek and the Armadillo World Headquarters.

Despite having a reputation for being a punk club, Stevie played there three times in 1978, with Triple Threat Revue.

The Rome Inn began life as a grocery/supermarket before transforming to the Rome Inn Italian restaurant in the 1960s. From 1975 to 1980 it would become an established music venue, with some famous connections. C-Boy Parks was the manager and made it Austin's hottest blues spot of the time.

The Fabulous Thunderbirds and Paul Ray's Cobras were weekly regulars, and Sunday night was The Triple Threat Revue, with Stevie and Lou Ann Barton. With such talent, the small club was often packed, Stevie first played there with Paul Ray and the Cobras in 1977 and played there for the last time with Double Trouble in April 1980.

In January 2022, the building, then a bakery burned to the ground and was completely destroyed. 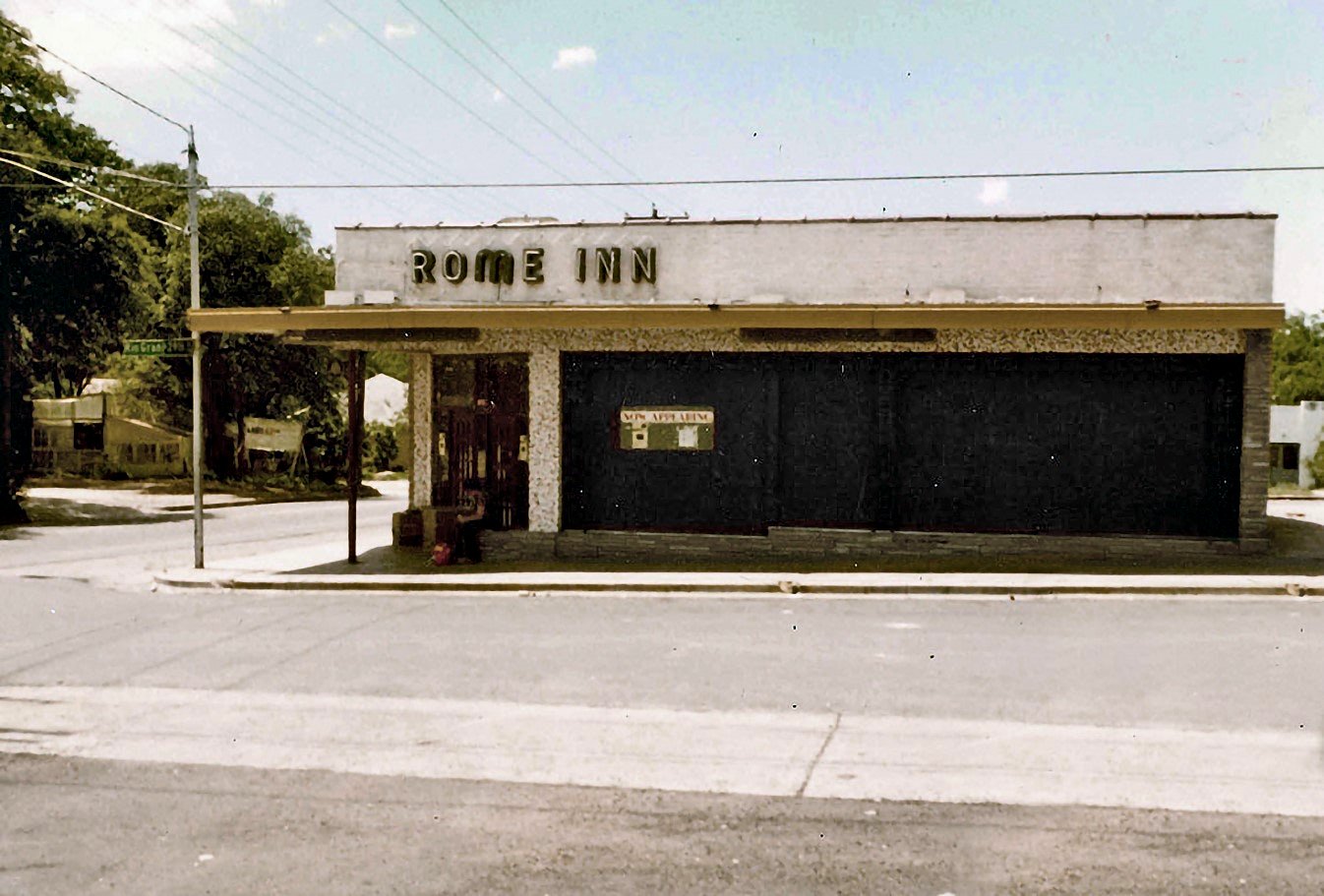 Originally called The Rollin' Hills Club, the Soap Creek Saloon was originally situated off Bee Caves Road, in the Rolling Hills area, just outside Austiin city limits and was approached along a rutted mud road.

In the late 1970s the venue moved moved to the north side of Austin and tried its luck at the old Skyline Club on North Lamar. The Skyline had a venerable history as a country music venue, so the move was not unsuccessful for a while.

By 1980, Soap Creek was trying its luck for a third time on South Congress at Academy, where apartments stand today. That worked too, for a while, but it finally closed its doors for good in 1985.

Stevie played there from 1975 onwards with Paul Ray and the Cobras, right up until October 1982, with Double Trouble. 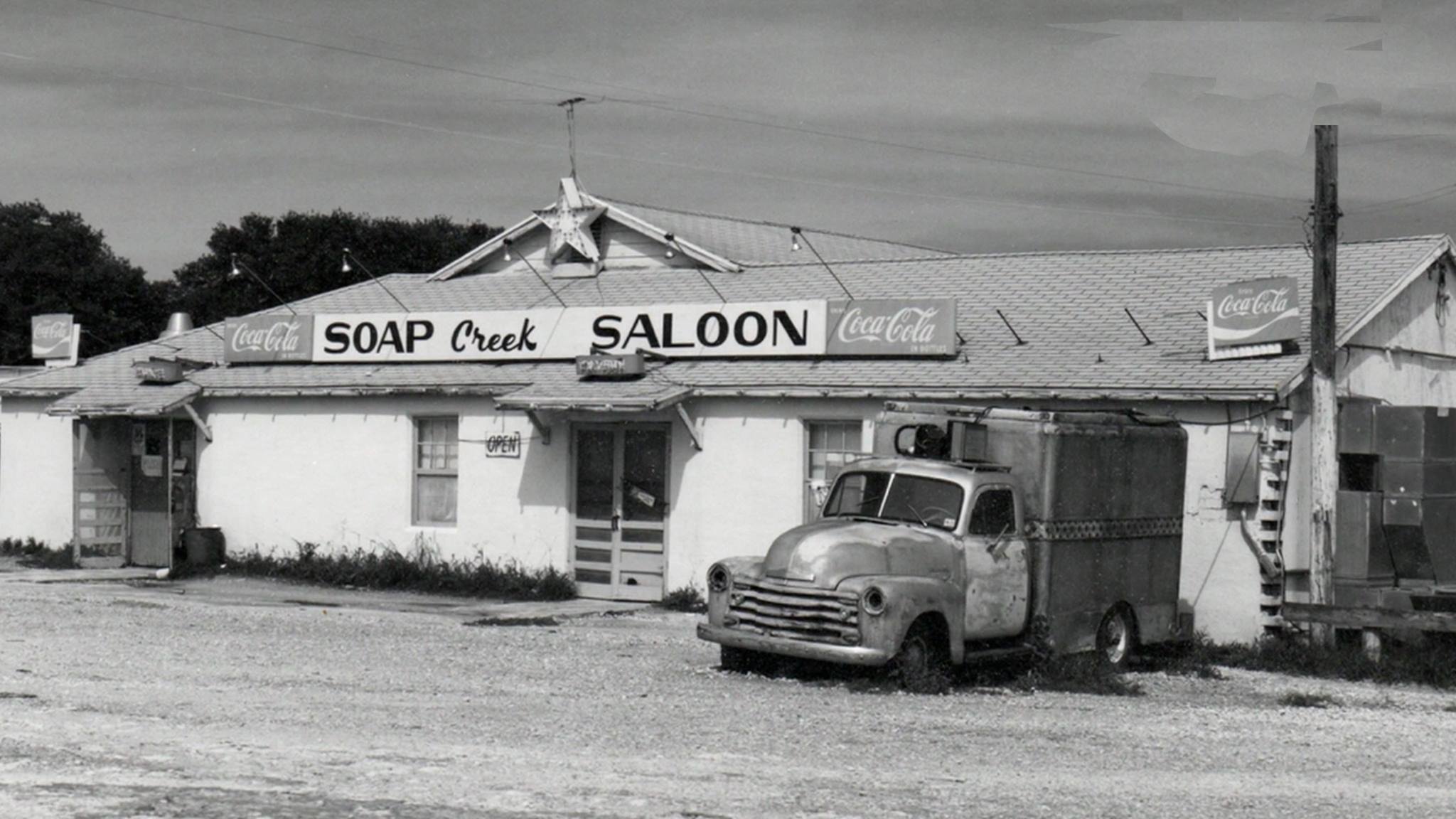 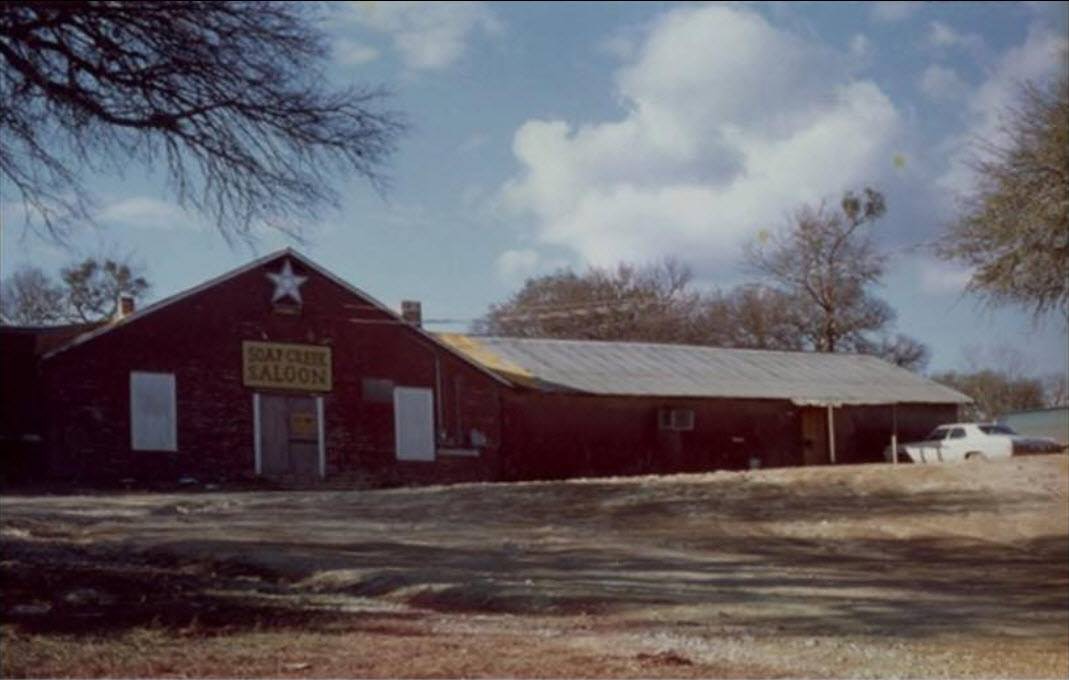 The Steamboat 1874 club was located on Sixth Street, on the corner of 6th and Trinity in Austin, Texas. It was solely managed and run by one person called David Cotton and he was the only person who worked at Steamboat in its entire 17-years. Not only was he known for booking the bands but he also bartended, worked the door, running lights, and even re-stocked the bar.

Stevie played there from 1977 with Triple Threat Revue, to February 1983 with Double Trouble.

The venue is famous for the recording of the live radio broadcast of Stevie and Double Trouble, which was later released as the album "In the Beginning". 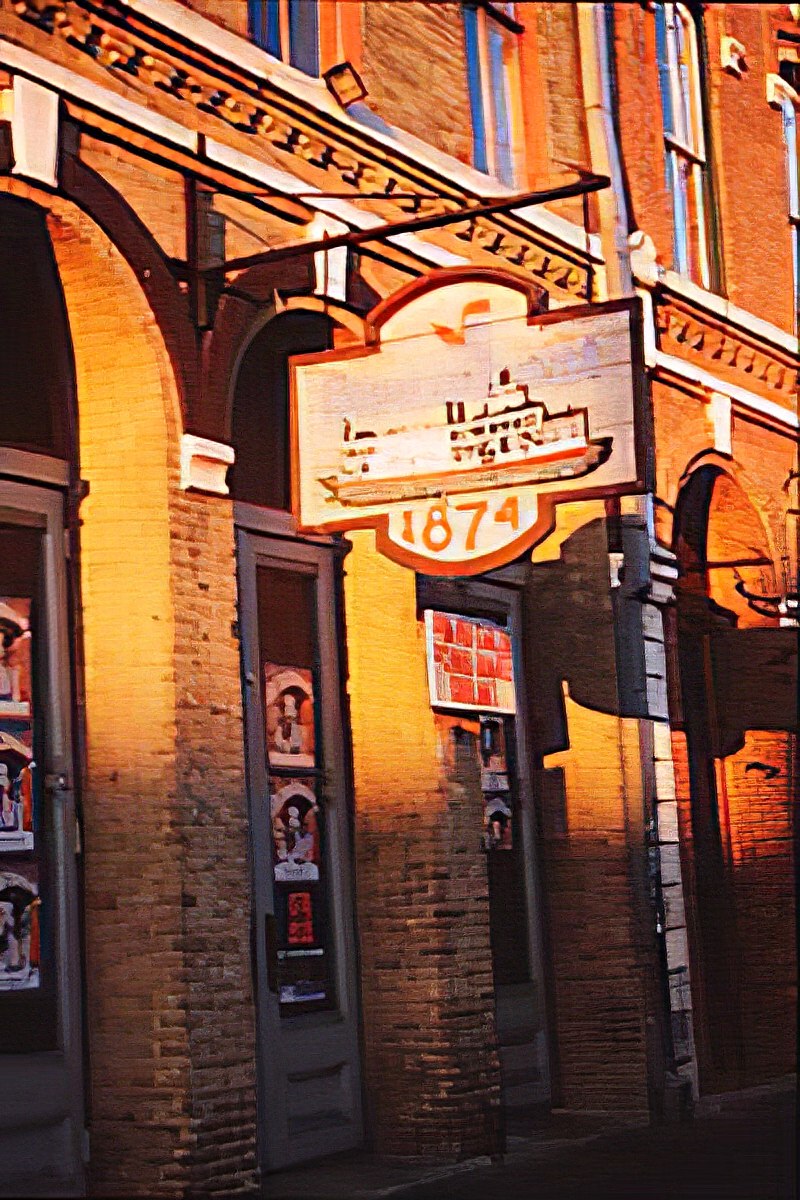 The first Stubb’s Bar-B-Q opened in Lubbock, Texas in 1968. The original building was small, only able to fit 75 people, but a few extra people were squeezed in when there was live music was on. In the 1970′s, Stubb’s restaurant became the heart of an explosive music scene. Stubbs was ground zero for musicians like Joe Ely and Stevie Ray Vaughn. Other famous musicians who would “play for their supper” included Muddy Waters, John Lee Hooker, Willie Nelson, Johnny Cash, Robert Cray, George Thorogood, Clarence “Gatemouth” Brown, Linda Ronstadt and the Fabulous Thunderbirds.

In 1985 the Lubbock branch closed down, in debt to the IRS, but re-opened in Austin, Texas in 1986, where it remains to this day.

Stevie never played at the Austin location, but played 4 times at Lubbock, three times in 1978 and once in 1982. 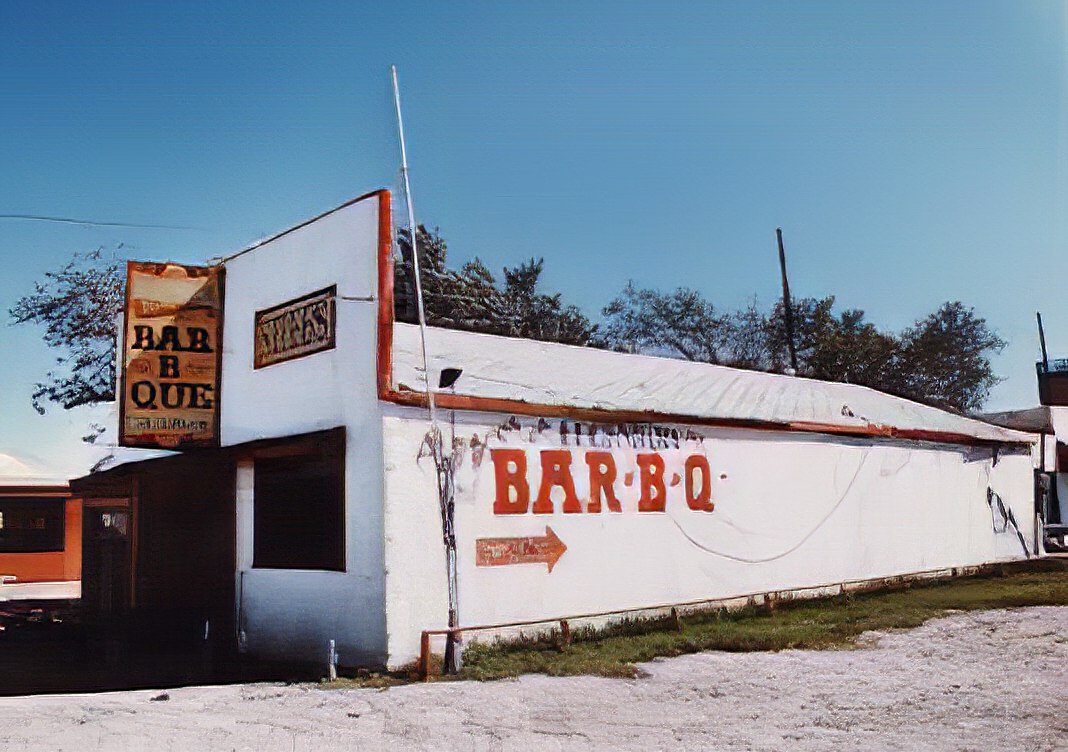