The Death of Stevie Ray 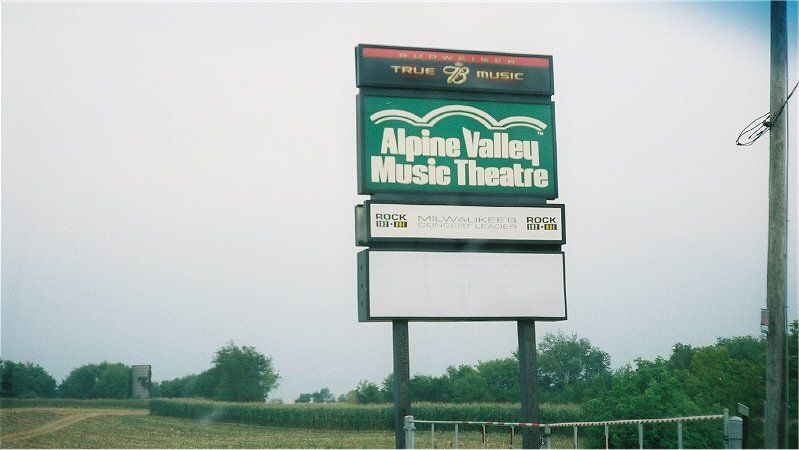 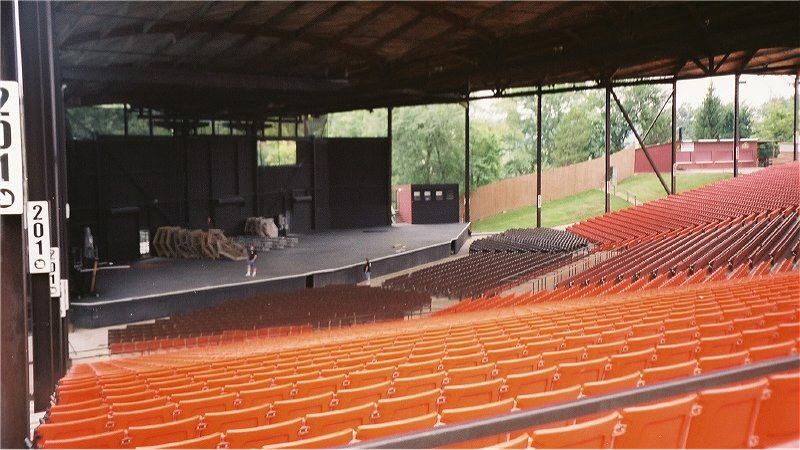 The day before his death, Vaughan told his band and crew members about a horrible nightmare he had, in which he was at his own funeral and saw thousands of mourners. He felt "terrified, yet almost peaceful." Backstage after the show that evening, the musicians talked about playing together again, particularly with Eric Clapton for a series of dates at London's Royal Albert Hall in February and March 1991, as a tribute to Jimi Hendrix. Moments later, Peter Jackson, Clapton's tour manager, said that the weather was getting worse and they had to leave soon. According to Double Trouble drummer Chris Layton, Vaughan's last words to him were, "I love ya."

Dew was settling on the windshields of the four helicopters waiting to transport the performers back to Chicago. Stevie Ray, his elder brother Jimmie Vaughan, and Jimmie's wife Connie made their way to their reserved helicopter, a Bell 206B Jet Ranger, registration N16933, booked by Omniflight Helicopters and piloted by Jeff Brown, a 42-year-old veteran pilot. Peter Jackson, one of Clapton's tour managers, let Vaughan know that three seats were reserved for himself, Jimmie, and Connie. Upon arrival, they discovered that their seats had been taken by members of Clapton's crew, agent Bobby Brooks, bodyguard Nigel Browne, and assistant tour manager Colin Smythe. Stevie, wanting to get back to Chicago to be with Janna, asked Jimmie and Connie if he could take the last seat, saying "I really need to get back." They obliged and caught the next flight in Lake Geneva with Layton and Jimmie's manager, Mark Proct.
At 1am, the helicopters departed in dense fog at two-minute intervals. Jeff Brown, occupying the right seat in the cockpit, guided the helicopter off the golf course, remaining at a high speed and slightly lower altitude than the others. It banked sharply to the left and crashed into the side of a 300-foot-high ski slope, about 0.6 miles from takeoff. All on board were killed instantly. With no fire or explosion, the bodies and debris were scattered over an area of 200 square feet. Nobody was aware of the crash until the helicopter failed to arrive at its destination the next morning.
At 7am, a Wisconsin Civil Air Patrol search helicopter, carrying sheriff's deputies, found the wreckage, which was 50 feet below the summit of the hill. Shortly after, Clapton and Jimmie Vaughan were called to the morgue to identify the bodies. According to an autopsy report, Stevie had suffered many unsurvivable injuries, such as transection and dissection of the aorta and multiple depressed skull fractures, along with ruptured spleen and liver, and fractures of the right thigh bone and ribs. An investigation found that no drugs or alcohol were involved, and all victims had worn seatbelts. No mechanical failures or malfunctions were found with the helicopter. Pilot Jeff Brown was instrument rated and had many hours of experience operating the Bell 206B at night. According to the National Transportation Safety Board, the cause of the accident was deemed to be controlled flight into terrain; Brown simply could not see the hill due to low visibility.
FINAL REPORT ON THE CRASH FROM THE NATIONAL TRANSPORTATION SAFETY BOARD (NTSB)
NTSB Identification: CHI90MA244 .
The docket is stored on NTSB microfiche number 43569.
Nonscheduled 14 CFR Part 135: Air Taxi & Commuter
Accident occurred Monday, August 27, 1990 in ELKHORN, WI
Probable Cause Approval Date: 11th September 1992
Aircraft: BELL 206B, registration: N16933
Injuries: 5 Fatal.
Four helicopters were being used at night to transport a concert group from a golf course area near Elkhorn, WI, to Chicago, IL. As the third helicopter (N16933) was departing, it remained at a lower altitude than the others, and the pilot turned southeasterly toward rising terrain. Subsequently, the helicopter crashed on hilly terrain about 3/5 mile from the takeoff point.
Elevation of the crash site was about 100 feet above the golf course and 50 feet below the summit of the hill. No preimpact part failure or malfunction was found during the investigation. Pilots of the other helicopters reported VFR (visual flight conditions) with some fog. A ground witness near the crash site reported haze and ground fog of varying intensity with patches of low clouds, but said stars could be seen through the fog.
The National Transportation Safety Board determines the probable cause(s) of this accident as follows:
Improper planning/decision by the pilot, and his failure to attain adequate altitude before flying over rising terrain at night.
Factors related to the accident were: darkness, fog, haze, rising terrain, and the lack of visual cues that were available to the pilot.
View the full NTSB report here. (PDF File) 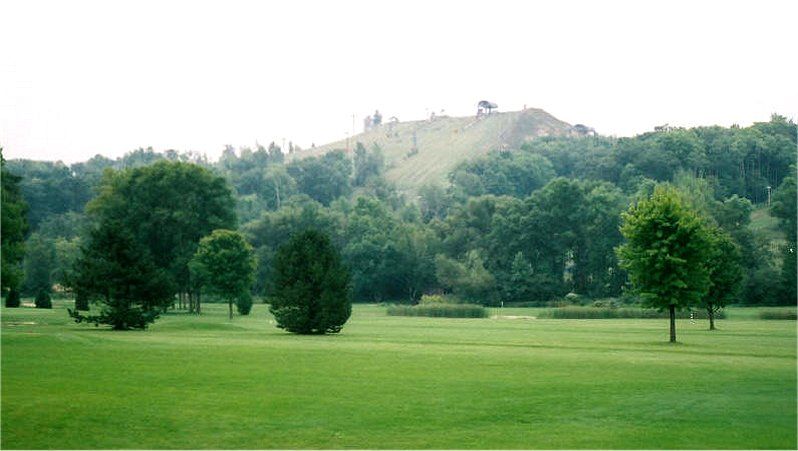 The Crash Site from the Stage 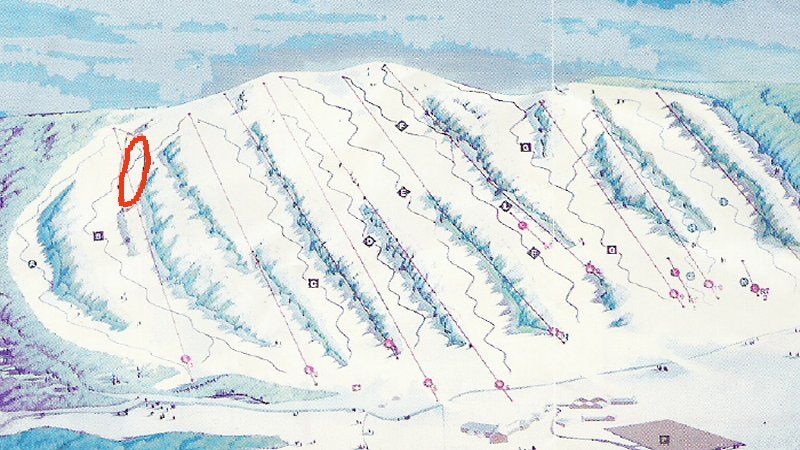 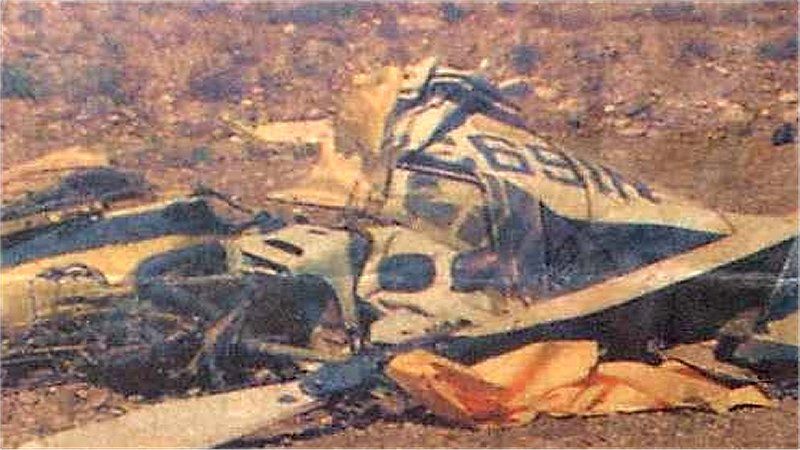 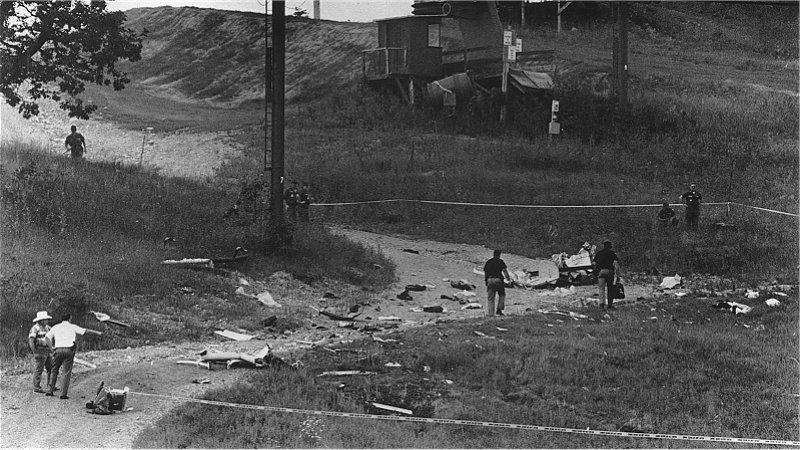 Scattered Wreckage at the Crash Site 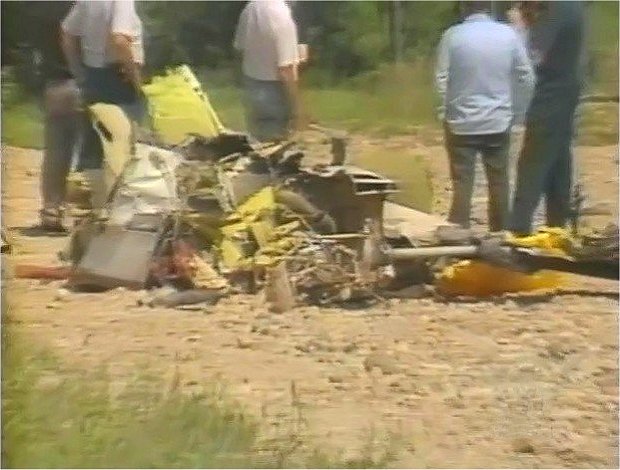 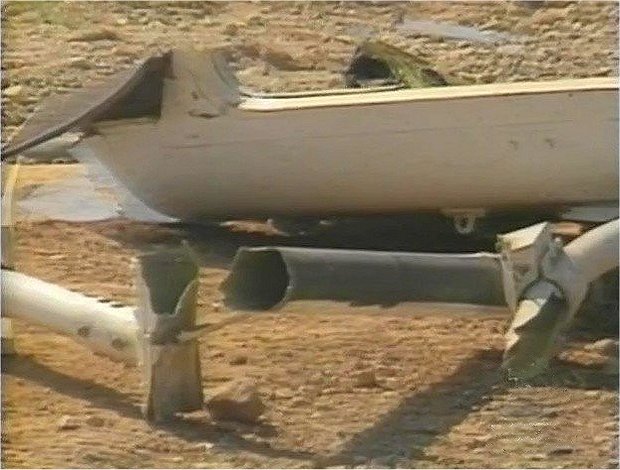 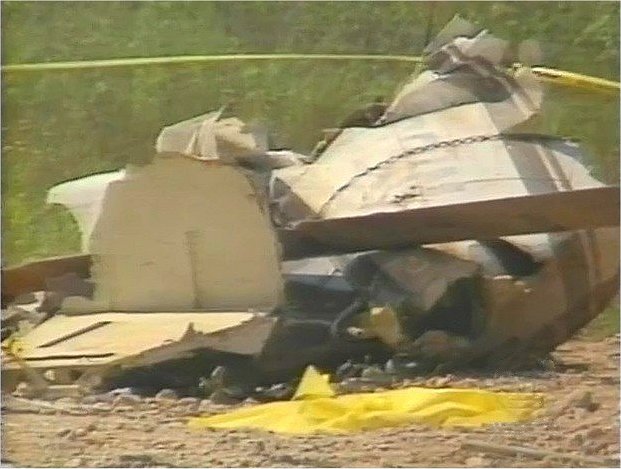