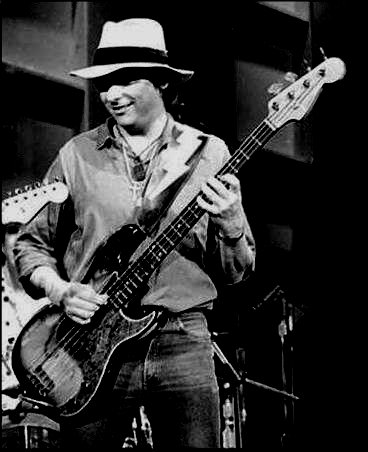 "Playin' with Stevie brought up my own playin', brought it up a notch. And just the feeling we all had about the band, well, you know, it was kind of a family thing. He changed my life, he really did. Playin' with him those 10 years was the best of my life" - Tommy Shannon

Tommy Shannon was born on 18th April 1946 in Tucson, Arizona, but moved to the Texas Panhandle when he was nine. He grew up mainly in Dumas, Texas, north of Amarillo on Highway 287.

He joined his first band, The Avengers at around age 13. The band members were Tommy (guitar), Tim Easley (vocals), Jim Love (guitar) and David Davis (drums). It would be a while before they realized the importance of the bass guitar, but eventually Tommy did. Their first gig paid them $80. That excited them so much, they gave half of it back.

At high school Tommy was in the band Ekos. Soon after high school he moved to Dallas and joined a soul cover band in 1966, initially called The New Breed, and later The Young Lads. He recorded two 45s with this band, which featured Tim Easly on vocals and Uncle John Turner on drums.

Tommy had the first of two important meetings at The Fog in Dallas in the late 1960s, where he first met Johnny Winter. He ended up backing Winter and in 1968 they formed a project known as The Progressive Blues Experiment. They cut one album for Sonobeat Records titled The Progressive Blues Experiment before being signed to Columbia Records by Clive Davis for $600,000 in 1969. Tommy appeared on both of these Columbia LPs released in 1969; Johnny Winter (self-titled), and Second Winter. During his tenure with Winter, Tommy also had the chance to perform with legendary blues man Muddy Waters.

At Woodstock, Johnny's brother Edgar joined them onstage. Johnny Winter ended up moving to a band featuring Rick Derringer in early 1970 that already had a rhythm section and there was no room for Tommy or Turner. They ended up in a San Francisco band called Krakerjack that comprised Uncle John Turner (drums) Mike Kindred (piano) Tommy (bass) Bruce Bowland (vocals) and John Staehely (guitar) Jesse "guitar" Taylor played lead guitar with the band as well for a time during 1970. Stevie Ray Vaughan, known as "Skeeter," was part of this band in its later Austin incarnation, along with Robin Syler on guitar. Krakerjack remained a group from 1970 to 1971.

During the 1970s, Tommy became involved with drugs, and began a cycle of jail, probation and rehab that would last for some time. He played with the Austin band The Fools briefly. Due to recurring drug arrests and failure of rehab in San Antonio and other locations, Tommy was finally sent to a "farm" in Buda and as a result of his probation on release, he was not allowed to join any bands because of the pervasiveness of drugs in the music scene.

Tommy became a bricklayer for a few years until he was eventually able to return to music in 1977. He played in a few unknown bands, then received a call from Rocky Hill, brother of ZZ Top's Dusty Hill. He moved to Houston to play with Hill and Uncle John, and in the late 1970s went on to play with Alan Haynes in the "Texas Boogie Band" (Tommy later played on Haynes' well received 1994 release, "Wishing Well"). Tommy also toured, opening for Bachman–Turner Overdrive and for Kiss at the Warehouse in New Orleans.

The group could have been short-lived when Stevie was asked to do some guitar tracks for David Bowie and was then offered the chance to tour with him on the Serious Moonlight tour. However Stevie turned down Bowie's tour offer shortly before its commencement, to concentrate on his work with Double Trouble.

After joining Double Trouble, Tommy met his future wife Kumi and they eventually married in 1986. He had returned to ever-increasing drug use, this time with Stevie. Eventually both realized that they wouldn't last if that lifestyle continued, so they checked into rehabilitation in separate cities and both became clean and sober. Things seemed like they couldn't be better, with the band being healthier, making popular music and gaining fame and fortune - until Stevie was tragically killed in August 1990.

In the months that followed, while Tommy struggled to reconnect with the music that now “made about as much sense to him as a chainsaw,” his Double Trouble partner, Chris Layton, and Doyle Bramhall II and Charlie Sexton, who had both enjoyed Stevie’s babysitting services as children, also mourned their fallen friend. They were each pursuing their own projects at the Austin Rehearsal Complex (ARC). Commiserating over their common loss, they reached out to Tommy and formed the Arc Angels as a side project intended as a distraction and for live jams only. But when the foursome began attracting a serious following at their impromptu appearances, the project took on a life of its own. Heralded as a Texas super-group, the band recorded one highly successful, critically acclaimed album before living up to its name and crashing to earth almost as quickly as it had arisen.

In the mid 1990s Tommy also played with Doyle Bramhall, Denny Freeman and Chris Layton in The Mighty Zor.

In the midst of the fallout from the Arc Angels’ demise, Tommy was asked to audition for Bill Wyman’s spot in the Rolling Stones. Although he left the two hour New York audition feeling that he had done well enough to get the job, it was not to be, and the blues highway carried him home once more, this time to yet another date with destiny.

In Austin Tommy and Chris joined celebrated soul singer Malford Milligan, along with David Grissom and David Holt, to found Storyville, touted as the consummate Austin super-group. The band released its first album in 1994, winning nine Austin Music Awards. Storyville went on to record two albums for Atlantic Records before breaking up in 1998.

In his post-Storyville years, Tommy returned to the songwriting he’d left behind in his teens. “That period when I started writing again was the happiest time of my life,” he says. “It was like being reborn.” Armed with new material, he and Chris at last focused on a recording project of their own. Released in 2001, Double Trouble's "Been a Long Time" featured a stellar list of guest artists, including Willie Nelson, Dr. John, Jimmie Vaughan, Eric Johnson, Susan Tedeschi, Jonny Lang, Kenny Wayne Shepherd, Reese Wynans, and members of the Arc Angels and Storyville. An Austin City Limits taping and accompanying Austin Music Hall all-star extravaganza billed as “Double Trouble and Friends” introduced the recording to an enthusiastic and welcoming fanbase.

In late 2014 and early 2015, Tommy was inducted into the Musician's Hall of Fame, Austin City Limits, and the Rock and Roll Hall of Fame, all as a part of Stevie Ray Vaughan & Double Trouble.

Tommy's mastery of the fundamentals combined with his confident tone and attitude make him an asset to any band, particularly a power trio. He truly serves as the musical backbone, thanks to his unyielding quarter note feel, his attention to musical detail, and his fluency with the blues genre. A hallmark bassist of Texas style blues, he can shuffle with the best of ‘em, using dead notes and hammer-ons to reinforce the backside of the beat. He frequently mimics guitar moves to add emphasis, whether it’s the signature lick to a song, the classic descending line in a turn around, or a chromatic lift from the one to the four chord. Not only does this reinforce the musical theme, it continues the lick-driven lineage of other great bass players such as Jack Bruce and Noel Redding.