He often used two amplifiers simultaneously, one more distorted than the other.

When recording "In Step", his last studio album with Double Trouble, Vaughan had over 30 different amps at his disposal, including a 1962 Fender Twin, a mint original 1959 Fender Bassman, and vintage Fender Harvard and Magnatone amps, in addition to the Fender Vibroverbs, Dumble Steel String Singers, and various Fenders and Marshalls he used onstage.

When recording each song, Vaughan experimented with different combinations of amps and settings until he dialed in the sound he wanted. 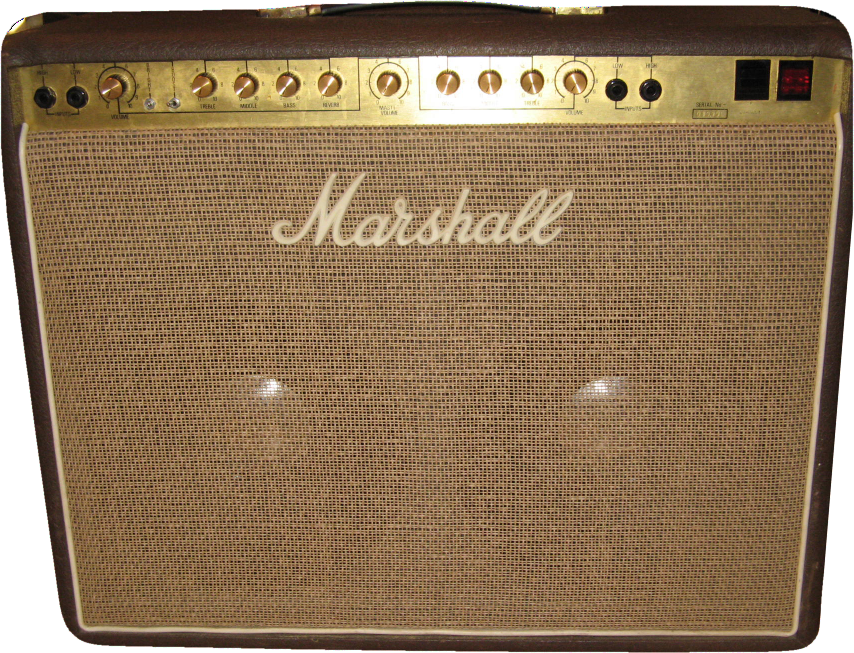 Stevie used this amp in early the 1980s for clear tone. The amp had two 12 inch Celestion G12-80 speakers, and brown vinyl and tan grill cloth and it was Marshall’s version of a Fender Twin Reverb.

With 100 watts of output and a power amp section driven by KT77 tubes, the Club and Country provides more clean headroom than the typical Marshall design.

During the preparation for the tour with David Bowie, David’s crew took Stevie’s Marshall and painted the vinyl black and the grill cloth grey to make it blend in with the other amps. Stevie eventually decided not to go, but the amp remained in that condition.

Stevie eventually traded in the amp in 1983. As of now, it can be seeb at the Stevie Ray Vaughan museum. 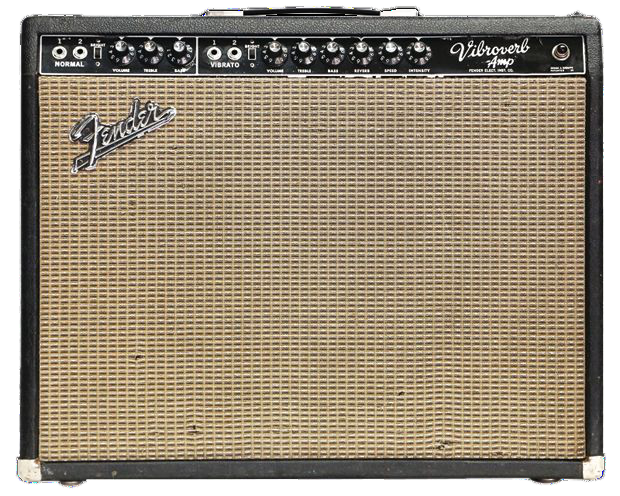 Stevie owned and used two 1964 Fender Vibroverb combo models. They can be seen in his back-line from about 1984 on and were the heart and soul of his live rig from 1984 onwards. The Vibroverbs, each featuring a single 15-inch speaker, were the source of his cranked-up overdrive tones, and he also used one of the combos to power his Fender Vibratone rotating-speaker cabinet throughout his career.

Introduced in 1963, the Vibroverb was Fender’s first amp with built-in reverb.

Fender initially produced the Vibroverb with two 10-inch speakers and brown Tolex covering, but in late 1963 the model’s design switched to a single 15-inch speaker and black Tolex. Stevie always assumed that his two Vibroverbs were one serial number apart from one another based on the numbers “5” and “6” on the tube charts, but those are production run numbers and the actual serial numbers were 36 numbers apart. 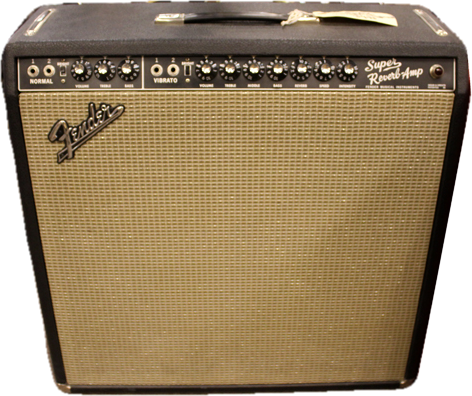 Before Stevie bought his Marshall Club and Country amp, a mid-Sixties blackface Fender Super Reverb was the source of his clean tone. When Vaughan started playing increasingly larger venues in 1983, he added a pair of Super Reverbs to his rig, which he used along with his Vibroverbs.

Like the Vibroverb, the Super Reverb is powered by two 6L6 tubes and provides 40 watts of output, but because it has four 10-inch speakers (Vaughan loaded Electro-Voice speakers in his Super Reverb amps) instead of a single 15-inch speaker it provided the louder clean headroom Vaughan needed onstage. 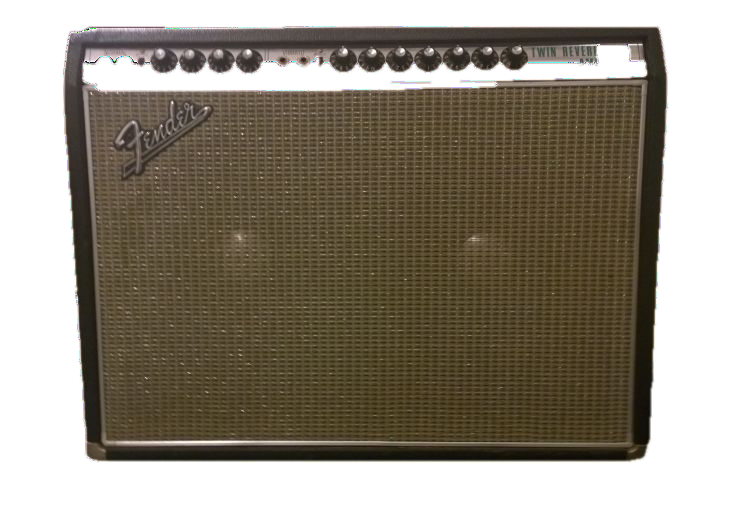 The Twins disappeared from his rig after that tour, only to resurface for a brief period in 1987 when they temporarily replaced his Vibroverb combos.

As Stevie’s insatiable appetite for power increased, so did the size of his onstage rig, until 1988, when he decided to simplify his multi-amp setup by stripping it down to a pair of high-powered amps: his 150-watt Dumbles and a 200-watt Marshall Plexi-Major Lead head.

Stevie experimented with a variety of speaker cabinets for the Marshall, including huge 4x15 and 8x10 cabinets designed for bass, before settling on a 4x12 loaded with Electro-Voice speakers like he used with his Dumbles.

If the Marshall Major lasted through the set (this model’s linear design frequently caused intense voltage spikes that arced across adjacent tube sockets and blew tubes), Vaughan would use it to perform a raucous version of “Voodoo Child (Slight Return)” to close his set.

After Stevie talked to Mike Soldano, and complained how he wasn’t happy with the fact that he had to use pedals in order to get his heavy tones, and had to crank the volume all the way up, Soldano offered to build an amp for him.

The amp that he built was a custom SLO 100 with a switch that would cut mid frequencies, which would enable Stevie to pull out those overdriven tones without any addition equipment.

Unfortunately, this whole deal happened just a couple of months prior to Stevie death, and he never had the chance to test it out properly. It is now back with Mike, who keeps it safe in his shop.

Impressed with the Dumble amp’s ability to maintain crystal-clean tone even when subjected to his aggressive low E string attack, Stevie custom-ordered a Steel String Singer head, which Dumble beefed up with 6550 tubes and 150 watts of output instead of the model’s usual 6L6 tubes and 100 watts.

When delivered in 1984, the Steel String Singer immediately became the main clean amp in Vaughan’s rig, earning the “King Tone Consoul” nickname that Vaughan bestowed upon it.

This was originally Tommy Shannon's amp but Stevie used it for the "Star Spangled Banner" performance at the Astrodome, Houston, TX on 10th April 1985. He used it alongside his Dumble Steel String Singer (above).
This amp is also listed in the 1983 customs inventory.

It is thought  that Stevie used Tommy's amp for that performance for volume and clarity reasons since he was playing in the middle of the Astrodome with nearly 50,000 people inside it.

Yellow version of the Dumbleland Special 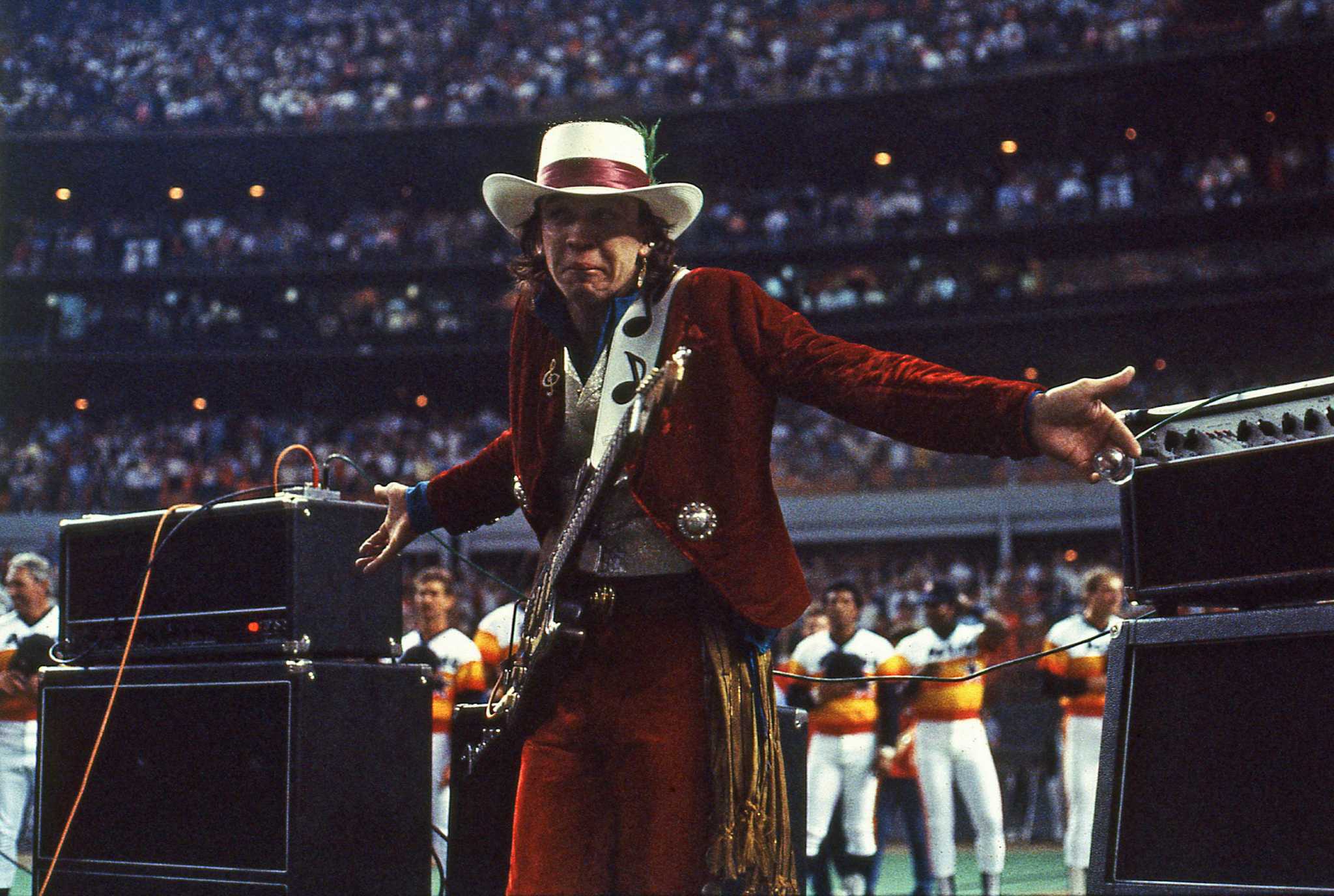 Tommy's Dumberland Special is on the left in the picture. 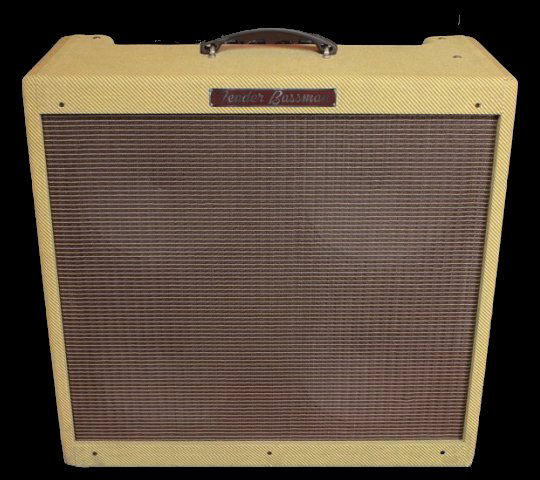 For his 1990 tour, Stevie replaced the Super Reverbs with a pair of Fender’s newly released ’59 Bassman Reissue amps. These were paired with matching 4x12 cabinets.

Stevie used this amp for the 21st July 1984 show at Palmer Auditorium in Austin, TX.
It is not known if he used it at any other show. 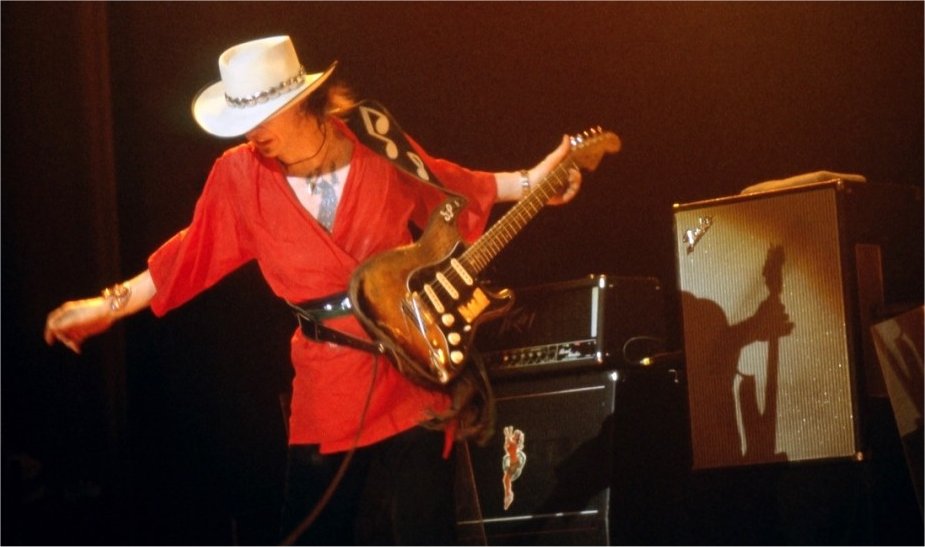 The following equipment was rented to Stevie for the Umbria Jazz Festival on 14th July 1985. His main amp rig was in transit to Montreux, for the following day's show.. 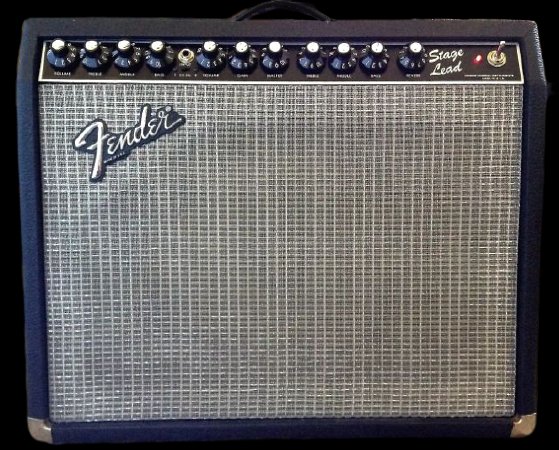 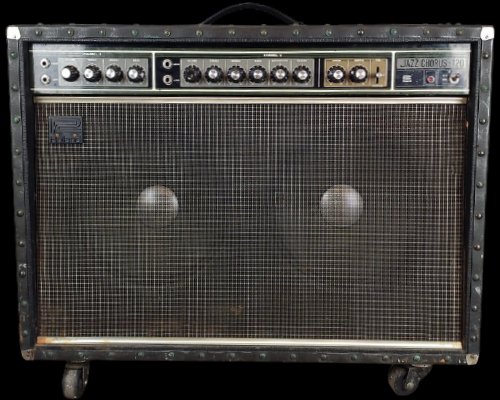 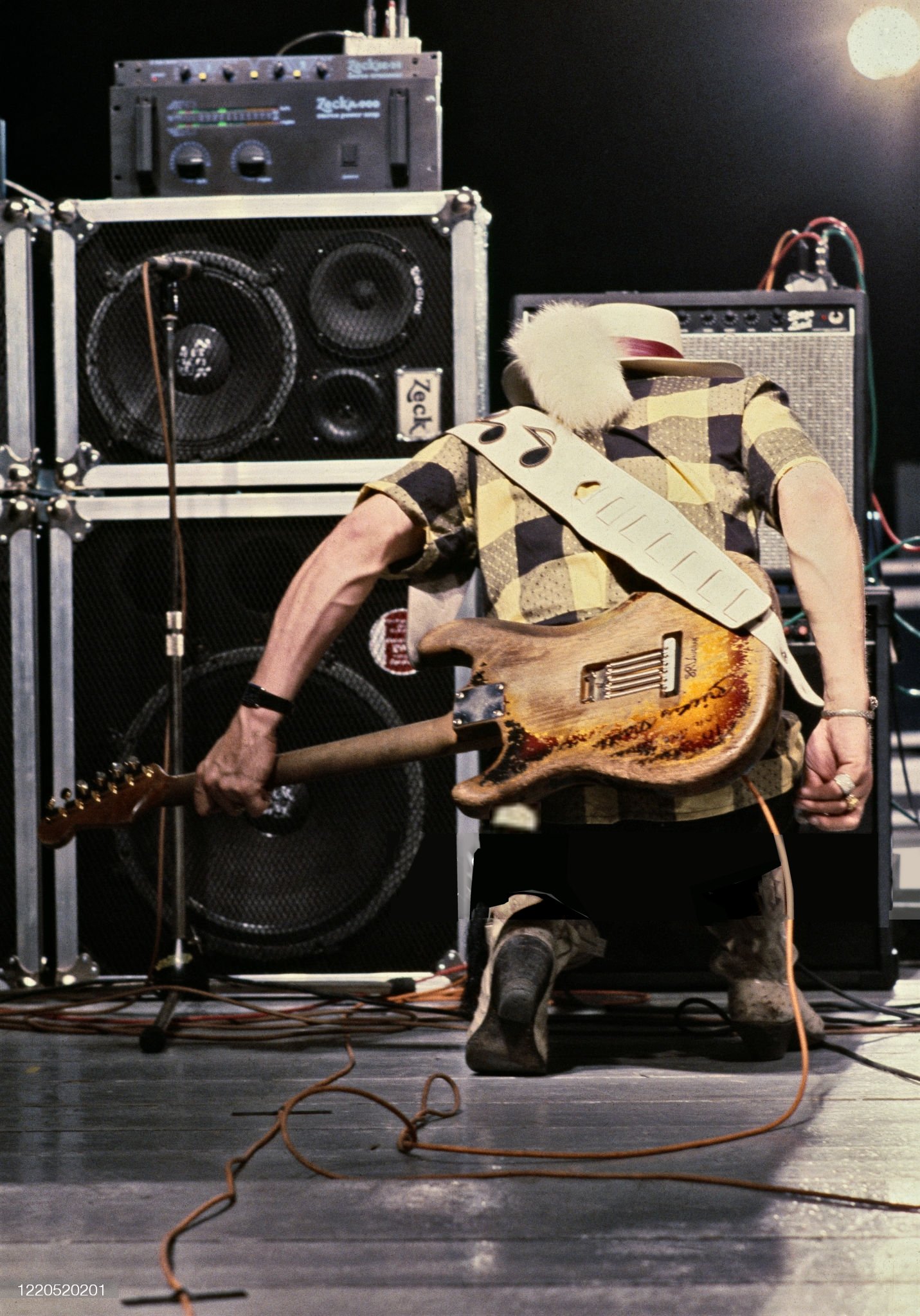 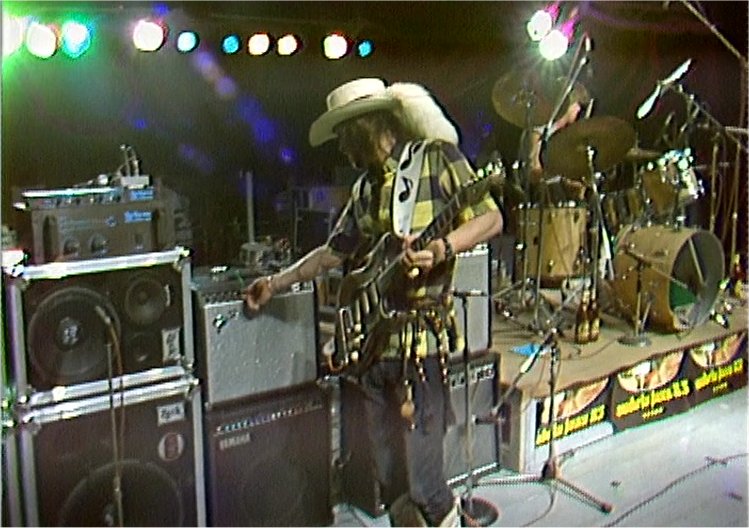