Stevie's addiction brought him close to death after playing the Pfalzbau in Ludwigshafen, Germany on 28th September 1986. Bass player Tommy Shannon was also suffering, lying on a hotel bed, sick with his own excessive cocaine and alcohol usage. He recalls how in the adjoining room Stevie was mumbling incoherently and vomiting blood and bile. Staggering to the phone Shannon pleaded that an ambulance be called, and Stevie was rushed to hospital. Miraculously he made some sort of brief recovery, but by the time SRV and Double Trouble arrived in London to play the Hammersmith Palais on October 2, the group and most of the crew were wandering backstage like zombies.
Dr Vernon Bloom, who specialised in helping addicts withdraw, including Pete Townshend and Eric Clapton, was contacted via Eric’s people and administered the relevant medicenes before Stevie and company went on stage. The show passed without incident, being neither great nor tragic – but in the gloom, just before he was called back for the encore, Stevie slipped off a gangplank and started internal haemorrhaging. For the second time in days he was rushed to hospital.
The day after the Hammersmith Palais gig was Stevie’s birthday. His habit was collossal. He was snorting a quarter ounce of pure, pharmaceutical Merck flake cocaine a day and downing at least a quart of Royal Crown scotch. Stevies septum is so destroyed that he had taken to dissolving the cocaine in the whisky.
X-rays revealed that Stevie’s stomach lining was rotting. Cocaine had crystalised in his intestines. Bloom gave Stevie two weeks to live. "Or you can stop right now and delay your death warrant. If you’re very lucky." As it was his birthday. Bloom allowed him a small plastic cup of champagne to celebrate and to wash down the Phenobarbital.
Stevie called his mother Martha in Dallas and broke down: “Ma, I’m real sick. I need help. I got to come home.”
This isn’t great news and the rest of the tour was cancelled, though the press release only stated Stevie is unwell. The guitarist flew home to enter the Charter Lane rehab centre in Atlanta, Georgia, while Shannon went into their Austin facility. Drummer Chris ‘Whipper’ Layton was in marginally better shape, though no stranger to the drug and booze frenzy that had insiders comparing Double Trouble to the Allman Brothers Band at their absolute worst.
Stevie’s performances were so erratic in the period covering the Soul to Soul and Live Alive albums that a second guitarist, Derek O’Brien, was hired to supply some lead work on tour as Stevie’s fingers could no longer produce the required sounds. Keyboards player Reese Wynans also joined the band. Wynans is shocked by their business affairs and the amount of money they waste to line dealer pockets.
Everyone seemed more anxious to hang around expensive studios playing ping pong and waiting for the main man to arrive bearing goodies than actually playing the blues. “The drugging was so bad I was scared for the man’s health” Reese recalls. “Stevie was so worn down he obviously needed to rest, but it’s hard to stop working when you’re in so much debt.”
In autumn 1986 Stevie called his wife Lenora (aka Lenny) whom he had known for the past 13 years, but she did not answer his calls. It turned out she had been seeing other men and spending her husband’s money on drugs. Divorce papers go to and fro and Stevie came home to find the house locked and the electricity supply cut off. Lenny had taken to hanging with some dodgy people described by local insiders as “police characters, criminals and the scum of the earth”. 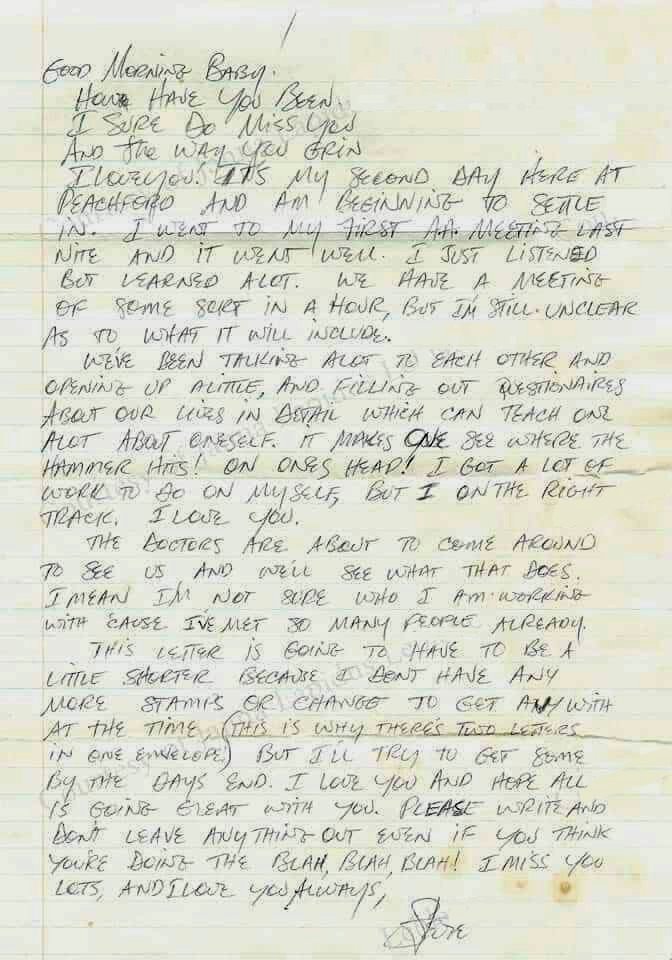 If there is solace in Stevie’s collapsing world it arrived when he bumped into a beautiful brunette, a 17-year-old Russian emigrant called Janna Lapidus. She found Stevie sitting with his head bowed on the steps of Wellington Town Hall in New Zealand where Double Trouble were performing in the spring before his final collapse. A rising star in the modelling industry, Janna went on tour in Australia with the band, and she did visit Stevie in rehab, and they became an item.

Although she was young, Janna had a wise head. During his London rehab the pair walked arm in arm in Hyde Park and pledged their allegiance to romance and loyalty, having seen an ageing couple holding hands by the Serpentine. Janna’s name is on In Step alongside the band’s saviour John Hammond. Janna is credited with turning Stevie’s life around.

Stevie turned out to have a strong constitution. On November 22 1986 the aborted Live Alive tour recommenced and for the first time ever he played clean and sober at Towson Centre in Maryland, with Bonnie Raitt.

In the period after his collapse and before he died Stevie would play some 300 shows. His connection was all about the audience and letting them know how he’d changed. He talked about it directly every night.

The days and nights of partying, drugs and alcohol were over.

The image shows a hand-written letter that Stevie wrote to Janna from rehab. (Click on the image for full size version.)